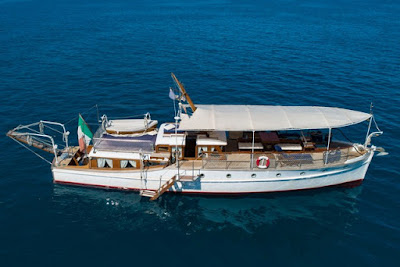 Launched in 1929 from the Brooke shipyard in Lowestoft, after Dunkirk and the war she came to the Mediterranean through the French canals. Katja has sailed without interruption ever since, proving herself a wonderful yacht, perfect for family cruising. Recently restored, this fascinating wooden motoryacht (14,70 mt) is looking for a new owner who will agree to follow the present proprietor’s goal: to ensure that Katja will celebrate her 100th birthday in prime condition, at sea! Currently Katja cruises in the north and central Tyrrhenian Sea.


KATJA, FROM ENGLAND TO THE MEDITERRANEAN
Katja was launched in England on August 15th, 1929, the year of the Wall Street crash in America and the beginning of the Great Depression that was soon to assail Europe. She survived the destruction of the Second World War after taking part in Operation Dynamo as a Little Ship, one of the 800 civilian vessels that evacuated hundreds of thousands of Allied soldiers from Dunkirk in 1940. Katja is a 14.7 meter long motoryacht, designed by H. Parker and built of wood by the Brooke shipyard in Lowestoft. She is still in perfect condition thanks to the doting care of her four owners, two English and two Italian, the latest since the early 1990’s.

THE TALE OF KATJA
Katja was built for Mawdesley Brooke, the owner of the yard that launched her in 1929, and was named for one of his daughters. The yard’s roots stretch back to 1874 when Brooke Ironworks, specialized in engines, began activity in Oulton Broad, near Lowestoft. Renamed Brooke Motorcraft between the wars, the firm was managed by Waveney Brooke until after the end of World War II. Katja’s first main engine was a 100 hp, six cylinder Brooke N°4059 type 40 F diesel, with a 5 hp Brooke “Dominion” as auxiliary propulsion. In 1931 she was sold to a new owner in Leicester for £ 2,875. Based for a period in Great Yarmouth, 200 km north of London and only 15 km from Lowestoft, in 1950 she traveled through the French canals down to the Mediterranean, flying the white ensign as a Dunkirk Little Ship. Katja welcomed the change from the misty English coasts to the mild climate of the Mediterranean. In 1967 she was given a new main engine, a 145 hp Perkins T6354, and a new 30 hp Mercedes auxiliary. In the early 1990’s she was purchased by a new owner from Rome, who sailed her in the Tyrrhenian from Tuscany’s Porto Santo Stefano. Sailing from her new base, Katja participated in classic yacht events in Montecarlo, La Spezia, Bocca di Magra and Anzio.

REFITS AND AWARDS
In recent years Katja has undergone several refits in Tuscan yards; Lacchini, and then Mileo. Founded by Constabile Mileo in 1951, the Mileo yard was known for their continuous production of dozens of wooden vessels. In 2003 the yard, run by the Mileo brothers Pompeo, Vincenzo and Domenico, began a major refit. The 25mm pitch pine planking below the waterline was replaced, with 8/9 meter long planks attached to oak frames with steel screws. The keelson was rebuilt to increase purchase for elements of the new frames, tightly fit between the keel and the stem. The hull was caulked in the traditional manner with calico, then faired and painted. The keel and stem, both of oak, are original. A new main engine (Perkins 240hp) combined with a four-bladed propeller, gives Katja a top speed of 12 knots. Other major jobs included fitting a bow-thruster, rebuilding the teak deck incorporating a layer of plywood, redoing the hydraulic and electrical systems and fuel lines, and replacing the wheel with a new hydraulic control. Remote steering is also set up, allowing Katja to be run from on deck while underway. The auxiliary motor was upgraded to an 80hp Perkins, with a folding propellor to port, giving her a respectable six knots.
All this care lavished on Katja couldn’t pass unnoticed, and during the 1992 Monaco Classic Week she was awarded 156 out of 210 possible points, putting her at the top of the ASDEC classification. The ‘Associazione Scafi d’Epoca e Classici’ has been protecting and diffusing the culture of classic and vintage yachting since 1987.

A TERRACE ON THE SEA
“Her topsides have sleek and very elegant lines - a gentle joining of the deckhouses to their pavilions, a smooth transition between deck levels, with the aft deckhouse windows that follow the sinuous curve of the sheer, the handrails that gradually run lower as they approach the bow and the side deck that curves towards the coachroof. It all denotes the execution of an excellent design by a renowned boatyard.” This quote from the early 1990’s by Piero Maria Gibellini, one of the world’s authorities on motor yachts and auxiliaries, refers to Katja. Her present owner, after almost thirty years of cruising Katja, cannot but emphasize how well laid out she is, with many separate spaces to enjoy even when there are many aboard. The foredeck is a terrace over the sea, one of her strongpoints. It gives privacy when moored stern to, and there’s always fresh air even on the hottest days. A sturdy awning covers the foredeck, with it’s two chaise longue (originally from the ocean liner Conte Biancamano; launched in 1925, she was sent to the wrecking yard in 1961), table and benches for up to ten guests. Two sun pads are laid above the aft coachroof and the wheelhouse. A true gangway is mounted to starboard, for ease of embarking and disembarking.

INTERIORS AND THE BAGLIETTO TENDER
Katja’s refined interiors make her a welcoming and comfortable yacht. The fine finishings, from the wainscoting to the cabin cabinetry, plus the paintings and vintage gouaches in the owner’s cabin, all combine to remind you of the Orient Express and send you back in time. She has seven berths: two in the owner’s cabin forward, two in the guest cabin, and three from the seating in the main cabin – one twin and one single berth. Katja’s vintage launch is a work of art. Built of wood in 1934 by the Baglietto yard in Varazze, she still has her original oars and oarlocks. Katja also comes with an inflatable with a 9.9 hp outboard.