FROM RIMINI TO THE CARIBBEAN, AN ITALIAN VINTAGE SAILBOAT TO FACE ATLANTIC OCEAN RACING 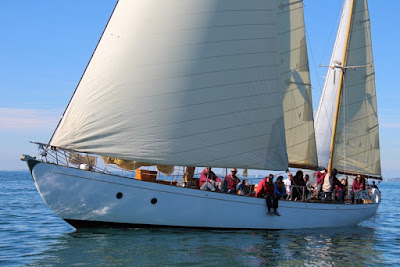 COCH Y BONDHU is the Italian flagged boat to take part in the next edition of the big offshore regatta Panerai Transat Classique, an Atlantic crossing of three thousand miles reserved for vintage and classic boats. This 15 meters ketch, built entirely in wood, was launched in England in 1936. In thirteen days it has completed its transfer from the North Adriatic Sea to Lanzarote in the Canary Islands. From here it will depart again on the 8th of January 2019 for the big Atlantic race whose destination is the Caribbean island of Saint Kitts where it’s due to arrive after about 3 weeks of uninterrupted navigation. COCH Y BONDHU will defend the colours of the Rimini Yacht Club.


The “Dragonfly” faces the Atlantic Ocean


COCH Y BONDHU in Gaelic means red and black and it’s also the name of a particular kind of dragonfly which was used for fishing. And just a dragonfly is designed on its 110 sqm spinnaker, which was made by a famous Ligurian sailmaker for the 80-year-old boat which flies the Italian flag. The old dragonfly is new preparing to face one of the most exciting challenges: the crossing of the Atlantic Ocean.   Coch Y Bondhu left from Rimini last summer heading to the Canary Islands. It stopped in Brindisi, Capo d’Orlando, Villasimius, Cartagena, Marbella, Cadiz and Arrecife travelling a 2400 miles on transferring to Lanzarote from where, on the 8th of January 2019, the prestigious Panerai Transat Classique four-year regatta is going to start. In the stretch of ocean from Cadiz to the Canaries, COCH Y BONDHU hooked the Portuguese trade wind proving great reliability and marine qualities reaching under sail even the 9 knots of speed. The Italian boat with a crew from Emilia-Romagna on board, will hoist the guide of Rimini Yacht Club.


COCH Y BONDHU belongs to the Gauntlet Class 17-tons and it was launched in 1936 by the English shipyard Berton Boat of Lymington on a Paul Rodney's project. Born with a Bermudian cutter sailing rig and a so called "canoe stern", its was built in iroko wood on oak frames. In its far past it sailed in the English Solent waters,  the home of yachting, and in that period among its former owners it also had Lord Astor, owner of the Times. In 1940, at the beginning of the Second World War, the boat was honoured by participating in the Dynamo Operation which allowed the repatriation of the English soldiers blocked on the French beach of Dunkerque. In 1952 it arrived in Italy. In 1967, on a project by the famous Yacht designer Laurent Giles, who wanted to supervise the working in person, the stern of the boat became "mirrored" and the sailing rig moved from cutter to ketch. Here follows a list of some of the victories achieved by COCH Y BONDHU in the vintage yachting category: Almirante Conde de Barcelona Trophy in 1992; Barcolana Classic Trieste 2010 (first place in real time); Barcolana Classic Trieste 2012; Trophée Principauté de Monaco Venice 2015;  XX Trofeo Città Di Trieste 2017; Trofeo Arrigo Modugno 2017. Among the other podiums conquered there's in the end a second class placement at Barcolana Classic 2009. On a couple of times it was awarded the prize for the best restoration too (Barcolana Classic 2009 and Mare Maggio Venice 2010).


A crew from Emilia-Romagna


At the helm of the boat there will be the owner himself, the fifty-year old entrepreneur in wood sector Paolo Zangheri who, after having restored the boat in Rimini in 2008 by Cantiere Navale dell’Adriatico shipyard, sailed  ten years between Croatia and Greece. Then, part of the crew is the fifty year old Renato Tartarìni, who was born in Bologna, an expert in offshore racing; the 60 year old Claudio Magrini, who has 35 years of sailing experience; and the 68-year old Ivano Brolli , who is also an expert sail man from Rimini with more then 40 years of sailing behind. Last spring  the two masted boat entered the Cantiere Navale dell’Adriatico shipyard to have some preparatory intervention made to get ready for the Atlantic racing, including the reinforcement of the skylights; the dubling of the jackstays; the replacement of all seecocks and of the propeller shaft braket , the assembly of a satellite cable on the mizzen-mast and of a new stay.