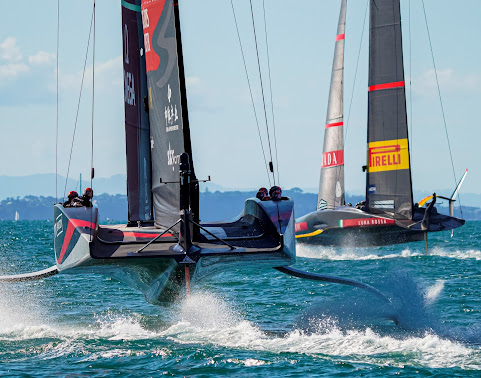 Auckland (NZ), March 13, 2021 - The third day of racing in the 36th America’s Cup presented by PRADA closes with another tie, leaving each team with three points.  Both regattas took place in a light breeze ranging 8-10 knots from the North on the most external course A, near the Takapuna shore. Luna Rossa Prada Pirelli took the first win home, with the New Zealanders lashing back in the second, scoring their point with a comfortable lead.

In the first regatta Luna Rossa makes an excellent start that allows her to move on starboard tack on the pin, windward of the kiwis who are forced to tack after a few seconds. For the remaining 29 minutes of the race the Italian crew sails in full control, with clean maneuvers, always in phase with the wind shifts. The first match race closes with an 18 second advantage.

In the second race, Luna Rossa experiences a setback at the start and crosses the line a few seconds after the kiwi boat. The entire regatta takes place with the kiwis in the lead, that stretches at each gate allowing the Italian no opportunity to recover.

Tomorrow’s schedule will hold two more races and this program will continue unabated over the next few days, until the first of the two teams reaches the seven points needed to win the oldest trophy in the world of sport.

Max Sirena, Skipper e Team Director  "It was a half positive day. We won the first regatta and they took the second, so we are in a 3-3 tie. We still need to win four races, but we are in an America’s Cup final, and the level is so high that every minimum mistake costs you dearly. We will debrief this evening and tomorrow morning and analyze our mistakes and see what we did well. We’re ready to get back on the water tomorrow and are more determined than ever."