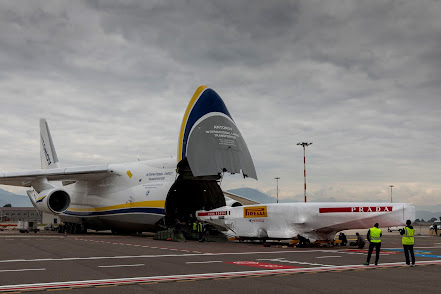 Bergamo, 2nd October - The second Luna Rossa Prada Pirelli hull is now New Zealand-bound after taking off from the Bergamo-Orio Al Serio airport on 2nd October.  Boat 2, built at the Persico Marine shipyard in Bergamo, about 10 km from the airport, was transported with an oversized load vehicle, and loaded on an Antonov 124-100, one of the largest cargo planes in circulation.Together with the hull the cargo will include the mast and one of the support boats, to reach Auckland after 38 hours of flight and two stopovers, in United Arab Emirates and Indonesia. It will then be transported to the team's new base at the Hobson Wharf, where the launch of Boat 2 is scheduled for the end of October.

The complex operation took place thanks to the full support of the operational structure of Bergamo-Orio al Serio airport, the “Pierucci Giuseppe" di Massimo & Fabrizio Pierucci company of Livorno, which has handled the team's logistics for over 20 years, and the efficiency of the Persico Marine shipyard, that from the very beginning has supported this ambitious project with skill and professionalism. The team wishes to thank all of them.

Max Sirena, Skipper and Team Director“This is an important day for our challenge. I want to take this opportunity to thank Persico Marine, and all the people involved, for their hard work. We can’t wait to get Boat 2 out on the water and start sailing in the Hauraki Gulf.”

Marcello Persico, CEO - Persico Marine“Having created Luna Rossa’s Boat 2 makes us proud of our people above all, and the technical level that our company has reached, contributing to the world’s premium sailing challenge to claim the America’s Cup. This “Made in Italy” project has once again highlighted the innovative and cutting-edge qualities of our region, which has again proved to be second to none at an international level.”