The Pezzini yard lays a new teak deck for Vanessa 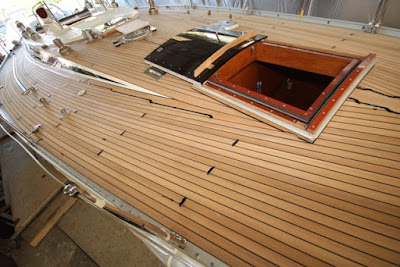 How do you lay a new teak deck? Here’s how it was done at the Cantiere Pezzini in Viareggio for Vanessa, a Swan 47 from 1985. The refit was undertaken by the yard for the owner of Vanessa, founder of the Sparkman & Stephens Swan Association. The Association represents more than 800 owners of Swans designed by the famous American firm; in the twenty years since it’s foundation in Milan, the S&S Swan Association has become the global reference point for these yachts, an essential part of the history of yachting.


Vanessa is one of 824 Swans built by the Nautor yard in Finland and designed by S&S in New York. These designs can be divided into sixteen categories, from the Swan 36 (10.91 meters long and built between 1967 and 1970) to the Swan 76 (23.26 meters long and built between 1979 and 1981). Vanessa, with an overall length of 14.57 meters, was launched in March 1985: the 69th out of the 70 built of the legendary Swan 47. Her first owner kept her for thirty years, sailing primarily in his home waters of the Baltic, but also completing two circumnavigations of the British Isles. In 2015 Vanessa left Germany for the Mediterranean and her new owner, Matteo Salamon. An art dealer based in Milan, founder and coordinator of the Sparkman & Stephens Swan Association, Salamon commissioned the Cantiere Pezzini in Viareggio to replace Vanessa’s teak deck. After 35 years, even a solidly built Swan should undergo a careful refit to restore her to her original beauty. Matteo was introduced to the Tuscan yard in 2018 by Michele Frova, skipper of Ojala II. Built of aluminum in 1973 by the Dutch yard Royal Huisman, and moored near Vanessa in Porto Lotti (La Spezia), this S&S design had her new deck laid by the shipwrights at the Pezzini yard, and Frova didn’t hesitate to recommend them to Salamon.


Vanessa’s mast was taken out in Viareggio in August 2019. While her hull was moved overland to the Pezzini yard in Via Paladini, the mast was sent to Franco “Ciccio” Manzoli’s Velscaf in Carasco, near Genoa, for sandblasting, painting and new shrouds and stays. The 37 square meters of Vanessa’s deck required about ½ cubic meter of first choice vertical grain teak; it had been chosen the year before at Massimilliano Barontini and Marco Guidi’s Arteak in Viareggio. After curing for 12 months, the new wood was ready to be cut. Elio Borio from La Spezia had already stripped and catalogued all the deck hardware; the old teak deck was removed by chisels and crosscutting. More than 3,000 stainless steel screws were taken out, their holes sealed with dowels covered with epoxy resin and leveled off. The underlying deck was then ground smooth and given a separation layer of epoxy, providing insulation and a good surface for gluing the new deck.


Beginning in November 2019, Arteak began to prepare the elements of the new deck (cockpit, coachroof, side-decks and seating) with plywood jigs. A full size mockup, drawn on the floor, was used to lay out the 12mm thick teak planks, five at a time. Each plank was 4.2cm wide, with a maximum length of six meters, with each plank butt-cut perpendicular to the yacht’s centerline. The longest groups were almost 15 meters long. Sikaflex products were used for seams and for glueing, accurately monitoring temperature and humidity as indicated. Six months were needed to lay the whole deck. If properly cared for, a new deck can last for more than 15 to 20 years.


The work was carried out by the owner of the yard, Massimo Pezzini, his uncle Sandro Pezzini, and Luca Sessa, a thirty year veteran of the Pezzini yard.


OTHER JOBS ABOARD VANESSA


Once in the yard for her new deck, several other jobs were carried out on Vanessa to bring her back to pristine condition: the bilges were cleaned and repainted after removing the fresh-water tanks and batteries; an unused seacock removed; the hydraulic system, bow thruster and anchor windlass were overhauled; the engine serviced and given a new stainless-steel exhaust system. For the interiors, the floorboards were painted with two-component transparent polyurethane and all the woodwork oiled. On deck, the teak trim of the foredeck hatch was renewed and new original Nautor seals for all deck openings were installed, as was new plexiglass for the three hatches. All the slides for the hatches are now in Tufnol. Vanessa was ready to sail again in June 2020.


After the refit, Matteo Salamon stated: “We bought Vanessa in 2015, with the goal of bringing her back to her original condition within five years. It’s 2020 and we can now say that we managed on schedule. To tell the truth, we even got a bit carried away with the quality of the work done. Modestly speaking, I think we can say that Vanessa is one of the two or three most beautiful S&S Swans on the planet. But Libelula, the 32nd Swan 65, owned by my friend Placido Arango, might beat her. Noblesse Oblige!”


THE CANTIERE PEZZINI IN VIAREGGIO


The Cantiere Pezzini shipyard in Viareggio (www.cantierepezziniviareggio.it) vaunts four generations of shipwrights and today is an internationally known and popular yard for classic and vintage yacht restorations. Founded in 1905, the yard passed from Attilio Pezzini to his son Egidio Pezzini, and then to the founder’s grandson, also named Attilio. From building fishing boats and lighters for transporting sand in the early 1900’s, the yard’s business evolved over the years and since the 1990’s has specialized in classic yacht restoration. Managed by the founder’s great-grandson Massimo Pezzini and his uncle Sandro Pezzini, many important refits have been completed over the last 40 years: from the 6 Meter Mirabellissima to the 8 Meters Margaret (1926) and Bamba (1927); from Doug Peterson’s Ganbare and the One Tonner Ojalà II (both from 1973) to the 5.5 Meter Violetta VI (1961) and the Italian navy’s yawl Artica II (1956). Along with the historic A Class and U Class dinghies Regina and Perseo, the yard also restored the first Dragons to sail in Italy, Ausonia (1948) and Blue Mallard (1949), and the Folkboat Pinocchio.


As if this wasn’t enough, Pezzini also built ‘gozzi’ from 5 to 7 meters in length, the 9.5 meter motorsailor Arianna, a 12 meter Grand Banks style motoryacht designed by Ugo Faggioni, the first prototype of Vallicelli’s Show 42 in cold-molded wood, and two new masts for the 1947 ketch Capitan Lipari, dismasted in a storm.


In 1986 Attilio Pezzini was awarded a special mention from Lucca’s Chamber of Commerce for his activity as a shipwright. In 2006 the yard built the Loby 33, a cold-molded vacuum built lobster boat in marine ply and mahogany sandwich with a PVC core. Today the complete refit of Mait II, the historic S&S yawl from 1957 campaigned by Italo Monzino, is keeping everyone busy.


The membership of the S&S Swan Association is made up of owners of the Nautor Swans designed by Sparkman & Stephens. Since the creation of Nautor in 1966, 824 S&S designed Swans have been launched, and almost all are still sailing today. The non-profit Association, founded in 2001 by Matteo Salamon and Stefano Cioni (1958-2015), now counts more than 600 members, from more than 20 countries, including Sweden, Germany, England, Italy, Spain, Greece, Chile and Brazil. The purpose of the Association is to share the collective passion for these wonderful yachts, and they all meet every two years in the Mediterranean for a rendezvous and regatta. The association’s website (www.classicswan.org) has become a reference point and a limitless source of information for their maintenance and up-keep. The honorary president of the S&S Swan Association is Pekka Koskenkylä, the founder of Nautor Yachts.