Vote in an international competition for Tirrenia II as best restoration 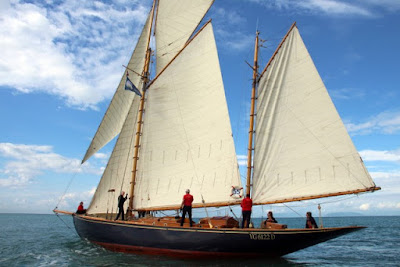 The vintage yacht Tirrenia II, launched in England in 1914, is participating in the Classic Boat Awards 2020, the prestigious international competition organized by the English magazine Classic Boat. The awards, including best restoration, will be presented this coming March in London. Tirrenia II returned to the water in June 2019 after a three year long refit at the Del Carlo yard in Viareggio. Anyone may click on the link to vote for Tirrenia II, participating in the category for restored sailing yachts over 12.2 meters. Voting will be open until midnight, March 9th.


CLASSIC BOAT AWARDS, THE OSCARS OF THE CLASSIC YACHTING WORLD


If we were to risk making a comparison, we might say that the Classic Boat Awards are the Oscars for the world of classic yachting. The awards, held since 2007, are organized by the prestigious English magazine Classic Boat, one of the leading international publishers in classic yachting and maritime tradition. Each edition of the awards has had about 40 yachts participating, divided into eight categories: restored sailing vessels under and over 40’ (12.2m), Spirit of Tradition under and over 40’, powered vessels of any size, traditional new builds of any size, centenarian vessels of the year, and the classic boating personality of the year.


Tirrenia II, a gaff ketch measuring 20 meters over all (if we include the bowsprit), was originally built of teak in 1914 in the H.R. Stevens yard in Southampton, to the design of Frederick Shepherd. She is competing in the restored vessels over 40’ category, for all vessels whose refit was completed during 2019. Voting is open until midnight, March 9th, at the following link: https://awards.classicboat.co.uk/restoration-of-the-year-over-40ft/. Your online vote could make the difference and give a boost to Tirrenia II in the rankings and reach the podium. This would be a wonderful result for both Italian classic yachting as a whole and the artisans of Viareggio in particular. On Tuesday, March 31st, London’s prestigious Royal Thames Yacht Club will host the awards ceremony; the winners will be listed in the May 2020 issue of Classic Boat.


FROM NORTHERN EUROPE TO THE CARIBBEAN


During her long life, Tirrenia II has sailed in the Mediterranean, northern Europe, the Atlantic Ocean and the Caribbean, always active in chartering, as a school ship and often participating in classic yacht events. Ashore in Viareggio since 2009, in 2016 she was auctioned to new owners from northern Italy who promptly moved her to the Del Carlo yard where an in-depth refit under the watchful eye of the well known Florentine expert Enrico ‘Chicco’ Zaccagni began. Her noteworthy refit was completed and on June 8th, 2019, Tirrenia II was launched in the presence of the famous conductress Beatrice Venezi and the popular actors Alessandro Preziosi and Roberto Farnesi. She then took to sea again and sailed for Genova, Portovenere, Capraia Island, Portoferraio on Elba, Porto Santo Stefano, Baratti and then returned to Viareggio in time for the 15th edition of the Vele Storiche Viareggio as the guest of honor. Here, under the command of the ocean sailor and author Lucia Pozzo, Tirrenia II was featured on the Italian television program Linea Blu. For the 2020 season, Pozzo will keep her steady hand on the helm for the coming season of classic yachting events across the Mediterranean.


REFIT AND THE TIRRENIA II CUP


Several major elements of Tirrenia II were rebuilt by the expert artisans of the Del Carlo shipyard in Viareggio, guaranteeing her many more years of wonderful sailing. These included dropping the lead keel and fitting new keel bolts, a new mahogany keel timber, replacing more than 100 linear meters of hull planking both above and below the waterline, and the construction of a new rudder in mahogany. For Tirrenia’s new lease on life, her new owners have also brought back the Tirrenia II Cup. This trophy was first awarded in 1925 by her then owner Guido Fiorentino, president of the Neapolitan branch of the Royal Italian Yacht Club, to the yacht making the longest cruise in the Mediterranean, and was presented annually until 1939. Eighty years later the Cup was put up once more, this time to the yacht making the most interesting cruise on the open sea. It was presented in 2019 to the small gaff cutter Bat, in honor of her circumnavigation of the Italian peninsula.