US Sailing Team Has Eyes on Adaptability Ahead of 2020 Worlds:49er, 49erFX, and Nacra 17 World Championships 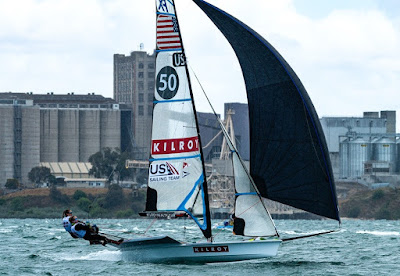 Melbourne, AUS (Sunday, Feb. 9, 2020) - On Monday, February 10, athletes in the 49er, 49erFX, and Nacra 17 classes will line up for the last major class title before the Olympic Games Tokyo 2020. 160 teams representing 32 nations will race on the waters of Port Phillip Bay for the 2020 49er, 49erFX, and Nacra 17 World Championship.
Competitors and race officials at the Royal Geelong Yacht Club are expecting fresh winds this week. According to U.S. Men’s 49er coach, Mark Asquith (GBR), they’re also anticipating constant change on the bay.


“Their biggest priority will be rolling with how fast the conditions and races changes here,” he said of the U.S. 49er sailors. “It’s gusty and shifty, leg by leg the racing is changing. So far it’s shown that there are opportunities to make gains all the way to the finish line. Hopefully that works for us.”


US Sailing’s Olympic Performance Manager and Coach, Sally Barkow (Park City, Utah) agreed that the conditions will require constant attention and adaptability this week. “We have now all spent three weeks training and a long weekend of racing, so Geelong is starting to feel like home for most of us,” she said.


“We’re settling into the dynamic wind patterns and going out each day with a big awareness that it won’t be like yesterday. We have a big focus on continuing to tackle our list of improvements and execute our strengths daily as an entire team. We’re looking forward to putting out best effort forward to compete against the best in the world.”


In the Nacra 17 class, Riley Gibbs (Long Beach, Calif.) and Anna Weis (Fort Lauderdale, Fla.) lead by nine points. The pair is looking forward to taking on the event, especially after delivering an impressive performance last week at the 2020 Oceania Championships.


Should the U.S. receive a spot in the Men’s 49er fleet, this regatta will likewise serve as an internal qualifier for the U.S. athletes. Nevin Snow (San Diego, Calif.) and Dane Wilson (Ojai, Calif.) had a strong showing at the 2019 Worlds and lead by five points over Ian Barrows (Miami, Fla.) and Mitchell Kiss (Holland, Mich.).


The first three days in Geelong will feature a qualifying series for the skiff athletes. The second three days for the skiffs constitute their final series while the Nacra 17s will race a single series. Racing is scheduled to begin at 10:55 a.m., local time.


The U.S. has also confirmed a spot on the starting line of the Laser fleet at the Tokyo 2020 Games. Buckingham currently leads the domestic Laser trials by 18 finishing positions over Barnard.


According to Buckingham's coach, Mark Ivey (San Francisco, Calif.), rather than focusing on the pressure of confirming his spot on Team USA for the Tokyo Games, he is working to have a consistent approach through the week. “Our focus is to keep mental and physical strength for the entire week of sailing against an elite international field,” said Ivey.


He also noted the constantly changing conditions they’re expecting this week, “Weather changes every few hours here in Melbourne so it’s difficult to predict too far out. Our first start is 2:00 p.m. each day, which should be in the heart of the build period for the southerly wind. That also usually brings great waves for downwind surfing.”


The 131 Laser athletes hailing from 45 countries will begin racing on Tuesday, February 11. Each day, racing in Sandringham will begin at 2:00 p.m., local time.