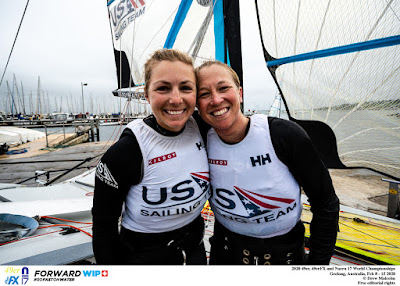 The final day of the 2020 49er, 49erFX, and Nacra 17 World Championships was packed with excitement for the US Sailing Team. After a long series of challenging racing, the U.S. team has much to celebrate, including a medal and four athletes that have qualified to the Olympic Games Tokyo 2020.

While the competitors in Geelong will finish packing the containers and prepare to get on their long flights back to the states tomorrow, the Laser sailors across the bay in Sandringham are preparing for the final races that will determine their U.S. Olympic trials.
To make up for lost time after yesterday’s postponement, the sailors had three races in pressure that built from 13-18 knots throughout the day. Today’s races featured the first round of the final series. In gold fleet, Chris Barnard (Newport Beach, Calif.) and Charlie Buckingham (Newport Beach, Calif.) battled amongst the top 42 competitors.
While both sailors struggled a bit in the breezier conditions this afternoon, Barnard kicked off the day with an impressive seventh-place finish. His coach John Bertrand (San Mateo, Calif.) commented on the conditions
“Our guys aren’t necessarily the heaviest or tallest in the fleet and can be inconsistent in those conditions. When you have such a packed fleet, it’s also hard to start exactly where you want to. Frequently, you have to compromise and if you can’t hold a lane after the start, it can be really difficult to catch the first shift. That’s the reality when you’re sailing at this level.”
Buckingham began this event with a comfortable 18-point lead over Barnard in the trials. Since the beginning of the event, Barnard has closed the gap by seven positions and according to Bertrand, “Anything can happen as we saw from the FX sailors today. Chris is in really great spirits and is looking forward to the last day of racing. Either way, I’m really proud of the effort he has put in. It’s a big ask for him to overcome the deficit we came in with, but he’s put everything into it with no compromise. So regardless of the outcome at this point, he can be pretty proud of the effort he’s put in and I am too.”
Tomorrow’s three remaining gold fleet races will determine which athlete will be selected to represent the U.S. in the Men’s Laser at the 2020 Games. The first warning is scheduled for 11:00 a.m., local time.