US Sailing Team Takes on 49er, 49erFX and Nacra 17 Worlds 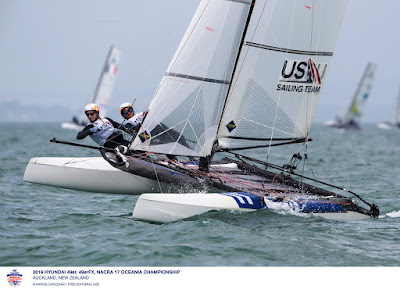 AUCKLAND, NZL (December 1, 2019) - The US Sailing Team athletes are ready to take on the 2019 Hyundai 49er, 49erFX and Nacra 17 World Championships. The event will be hosted from December 3-8 at the Royal Akarana Yacht Club, in Auckland, New Zealand.
Last week, at the 2019 Oceania Championships, U.S. athletes measured up against many of the competitors that will be seen on the starting line of the World Championship event. The U.S. athletes delivered a strong performance and left the event with a bronze medal.


The stakes will be high for U.S. competitors at this event. It will be the first of two regattas that will determine the U.S. Olympic Trials. In each fleet, the U.S. boat with the lowest combined finishing position from this event and the 2020 World Championships will be named to the 2020 U.S. Olympic Sailing Team.


The 2019 World Championships will be especially important for the U.S. Men’s 49er athletes. In addition to fighting for athlete selection, they will be making their final attempt to qualify the U.S. as a country for the Tokyo 2020 Games. Because there are more countries competing than there are spots available at the Games, each country must qualify before athletes can earn selection to their country’s Olympic team.


The U.S. has already qualified in the 49erFX and Nacra 17 classes. In order to qualify the U.S. for representation in the Men’s 49er class, one of the five registered U.S. teams will have to be among the top four countries that have not already qualified.


The U.S. will be able to come into this event with some confidence after a strong showing at the Oceania Championships. US Sailing Team Men’s 49er athletes, Andrew Mollerus (Larchmont, N.Y.) and Ian MacDiarmid (Delray Beach, Fla.) led the competition in their fleet after day one and posted several top-ten finished throughout the event.