U.S. Finn Athletes Line Up for the Last of the 2019 Olympic Class World Championships 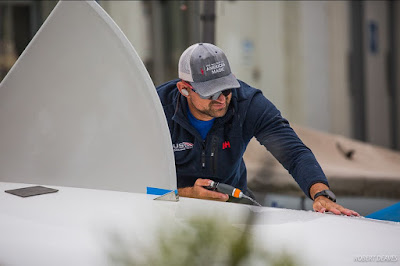 MELBOURNE, AUS (Dec. 15, 2019) - On Monday, December 16, the last event of the 2019 Olympic class World Championships will begin with the 2019 Finn Gold Cup at the Royal Brighton Yacht Club, in Melbourne, Australia. Three of the total 63 competitors will be representing the United States. Caleb Paine (San Diego, Calif.), Luke Muller (Fort Pierce, Fla.), and Eric Anderson (Chicago, Ill.) have been training hard in Melbourne over the past several weeks and are looking forward to this week’s racing in Melbourne.
The three U.S. athletes have been taking advantage of their time on the water to get familiar with the local conditions, which have been what Olympic Head Coach, Luther Carpenter (Cypress, Texas), dubs “classic Melbourne.” While the athletes have gotten a feel for the 12-23 knot winds with oscillating shifts, they’ve also been working on technique in fast-moving waves mixed with short, square chop that demand physical and technique-driven work.


However, similar to most of the major Olympic class championships of 2019, it seems the forecasts for the upcoming week will shift to a warm and slow-building thermal most days. The southerly wind tends to take a while to fill in the massive Port Phillip Bay, and as the host site, Brighton, resides at the top of the bay, Carpenter thinks, “patience and anticipation will be the early skills to draw upon.” In anticipation of the slow-building thermal, the regatta schedule mimics the conditions with each first start scheduled for 1:00 p.m., local time, every day.


The U.S. athletes have been preparing for this event for a long time and are looking forward to making the most of the racing. Caleb Paine had a long, travel-filled season preparing for this regatta. He has been particularly determined to maximize his time on the water since August. Paine trained in Holland for over a month in the early fall, then spent time in Toronto, and finally set up shop here in Melbourne just before the U.S. Thanksgiving holiday. He’s looking forward to demonstrating the skills he’s been working on, “I know it’s time to deliver the focus and effort I know I’m capable of. It’s been great to really put the time in, and I look forward to getting out and racing.”
Paine’s fellow US Sailing Team athlete, Luke Muller, arrived in Australia in early November, to be surprised by cold temperatures and blustery conditions. He’s since seen the season change to the southern hemisphere’s early summer and looks forward to the regatta. “I am focused on keeping things simple and doing what I know in order to perform at the best of my abilities.”


Eric Anderson will be the third and final sailor to wear the American flag on his sail this week. He continues his mission of gaining as much experience as possible in the highly competitive Olympic class world. Anderson’s fitness and abilities have certainly peaked for this event, and he will look to finish in his personal best major Finn event.


All competitors have a long week ahead. The sailors and coaches are expecting the courses to be long with the wind delivering a variety of conditions. Long upwinds and constant pumping on endless waves will tire their bodies while anticipating opportunities to gain leverage in the oscillating shifts will test their mental endurance.


Carpenter looks forward to getting out there, sizing up the large racecourse, and getting a good feel for the Melbourne southerly. “The Royal Brighton Yacht Club has been an amazing host, the local population is thrilled to have has us here, and the competitors all look primed to get this party started!”
Racing is scheduled to begin on Monday, December 16 at 1:00 p.m., local time (GMT +11). Visit this page for daily updates on the U.S. athletes.