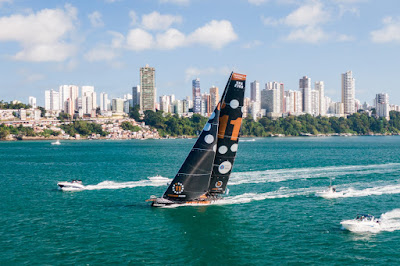 With an elapsed time of 14 days, 6 hours, 10 minutes, 23 seconds Charlie and Pascal crossed the finish line of the Transat Jacques Vabre on Sunday in 5th place, with Apivia, PRB, and Charal claiming the coveted podium spots in first, second, and third.

On Tuesday, the team was bumped up to 4th in the overall race standings after Advens for Cybersecurity was assessed a penalty by the international jury for missing the final mark of the race course.

Pascal's thoughts on the race: "For me it was unbelievable to be racing against other boats that have 5 knots faster speed than you. That’s new for me. Ok, so Apivia was the clear and deserved winner, no question, but we know that several boats had faster boat speed than us, so we have to feel this [result] in our hearts, too."

Mark's thoughts on the race: "It was an amazing race with some highs and lows. Charlie and Pascal had some great speed and made a lot of good tactical choices. Overall, we’re just really proud of the guys and fourth place is a great result for us in the first part of this campaign."