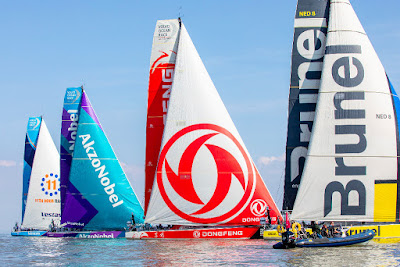 Extreme sports athletes have many things in common, irrespective of whether they pursue their dreams in the mountains or on the oceans.     That shared sense of adventure couldn’t have been more apparent last week in the Welsh capital, Cardiff when American snowboard legend Travis Rice accepted an invitation from current leaders in the Volvo Ocean Race, Dongfeng Race Team, to spend a few days with the team.

Each Dongfeng crew member gave the snowboarder an honest insight into life at the extreme as they prepared for the grand finale of one of the toughest offshore races in the world.

“For the last 20 years, I have slowly progressed to having my own 48-foot catamaran that I have lived on for the summers for the past six years and sailed roughly halfway around the world. That gives me a base line to actually try and understand what it takes to be an offshore racer, but there is a huge difference."

“To be honest, being part of this Volvo Ocean Race stopover is a dream of mine and it has been amazing to have a tangible feel for the feats that these sailors, men and women, are overcoming with this race,” he added.

This is Dongfeng Race Team’s second consecutive campaign in the Volvo Ocean Race,  with the team – sponsored by the Chinese car and truck manufacturer Dongfeng Motor Corporation - once again committed to its long-term mission of helping to develop the sport of offshore sailing in China. After finishing third in the 2014-15 edition of the race, this time round the team is focused on challenging for overall victory.

With six nationalities on board, including talented young Chinese sailors, the crew is leading by just one point from the Spanish team on MAPFRE and by three points from the third-placed Dutch crew, Team Brunel.

Dongfeng Race Team skipper, Charles Caudrelier knows that overall victory is tantalisingly close and has described the next days as the most important of his career. “It’s a dream if we can achieve it all together, it will be fantastic,” he said.

On comparing the similarities between snowboarding and the Volvo Ocean Race, which involves 45,000 miles of racing through some of the most remote waters on earth, Travis talks about the sense of freedom involved in both.

“In wild nature, you are at the mercy of your own decision making and there is a sense of freedom that comes with that,” he said. “But I think there is a bit of a misconception with the term freedom. This isn’t about going somewhere with no rules and no accountability, it is actually the reverse; it’s not until you have total responsibility that true freedom comes into play. That is why I have so much respect for what these guys are doing offshore; they succeed together and they fail together, but at the end of the day it is a group effort and otherwise it doesn’t work.”

After sailing with the crew, Travis added: “This beautiful red boat is now in first place and this is a testament ultimately to how well crew communication and teamwork takes place on board.”

“As a snowboarder, I love this kind of teamwork,” he continued. “I think from the outside looking in on my sport, people think of it as a bit of an individualistic endeavour. But something that I have always loved doing, and spent more and more time doing, is film-making and going out into the back country with a select group of individuals that have grown to work very well together; there is a real team dynamic. For us in snowboarding, that is the team sport.”

Travis wasn’t the only one inspired by the experience. Female sailor and three-time Olympian, Carolijn Brouwer commented: “It is a real pleasure to welcome Travis to the team. His enthusiasm is contagious and for us it was great share our experience with an extreme sports athlete who perfectly understands what we do.”

Before the start of Leg 10 from Cardiff to Gothenburg, Travis took the opportunity to climb the 100ft mast to leave a message of support for the crew. He drew mountains along with the message: “Get lost and you will find, let intuition lead the way.”

“I hope we won’t be getting lost,” said Caudrelier with a big smile. “I have one of the best navigators with me at the chart table and Pascal (Bidegorry) has no room for any mistakes so close to the finish. But I totally understand the message, it is so true. In sailing, you need to use your knowledge and experience for sure, but listening to your intuition and letting your feelings guide you is important,” he added.

The Volvo Ocean Race fleet left Cardiff in light winds yesterday but Travis made sure to see them off on a good note, performing an impressive jump from the first spreader on the mast. "These guys are 100 per cent, 24/7 so I feel like it would be a shame not to go 100 per cent for Dongfeng, right until the very end,” he said before jumping into the waters of Cardiff Bay to a round of applause from the Dongfeng crew.

The fleet is currently in an epic battle as they race to Gothenburg in the final stages of the race. Travis Rice, meanwhile, is hopelessly addicted to the Volvo Ocean Race tracker, along with the rest of us…