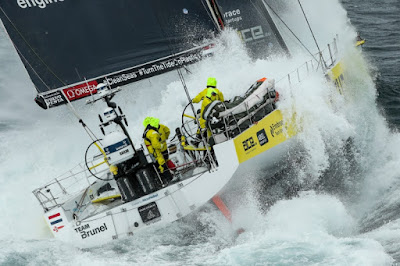 Bouwe Bekking’s Team Brunel shot past most of the fleet over the past 24 hours, eventually eking ahead of MAPFRE on Thursday morning and taking the lead in Leg 10 of the Volvo Ocean Race.    But with less than 200 miles to go to the finish line in Gothenburg, Sweden, less than 10-miles separate the top six crews. No position is secure and the intenity is relentless.
In a clear sign of intent, Bekking and his Brunel team showed they have their eyes on the overall race win as they pushed the pace overnight and inched out to a half-a-mile advantage on their Spanish rivals.
The veteran Dutch skipper has seven previous editions of the Volvo Ocean Race under his belt dating back to 1985-86 – yet despite plenty of leg wins Bekking has never lifted the overall trophy.
However he could be about to get his best shot at remedying that.
If the leg were to finish this evening with the teams in the positions they occupy currently, both Brunel and MAPFRE would be tied at the top of the table on 65 points while Dongfeng Race Team, the current overall leader, would slip to third overall on 64 points.
Having had a slow start to the race, Brunel has finished on the podium in the last three stages, winning Legs 7 and 9 and collecting a phenomenal 37 of 39 points available.
The blistering change in fortune has rocketed them back into contention – and a win in Leg 10 would confirm their chances for the overall race victory.
“Like we've seen in absolutely every leg, it's not over until you cross the finish line,” Brunel’s Kyle Langford said.
“We've been on the bad end of that – we were leading into Newport on Leg 8 and lost it with 30 seconds to go.
“So, we know that anything is possible until the finish so you've got to keep an optimistic attitude, even if you're behind. But we're positive, I think, that we can win this leg and also the overall race we've just got to keep doing what we're doing.”
Having led the race overall for the early stages before being caught up, the MAPFRE crew are all too aware of the enormity of the situation.
“We’re all pushing as much as we can,” said MAPFRE’s Antonio ‘Neti’ Cuervas Mons. “I think Brunel found a new mode which has seen them sail faster than us. We are maybe faster than them downwind though. The race will be decided over these coming hours so we just need to keep pushing as hard as possible.”
Meanwhile, Dongfeng were kicking themselves for allowing their rivals to slip past as the fleet skirted the southern coast of Norway in southerly winds of more than 30 knots.
“It was not the best night we’ve had on Dongfeng – we’ve been quite slow and we don’t know why,” said Dongfeng’s Kevin Escoffier.
“It’s very annoying. We were behind MAPFRE but Brunel passed us, as did Turn the Tide on Plastic and AkzoNobel.
“We’re now back ahead of Turn the Tide but there’s still a lot of work to do to come back at least on Brunel and MAPFRE and be able to play for the victory on the final leg.”
The latest ETA sees the leaders arriving in Gothenburg around 2030 UTC (2230 local time), having raced 1,300 miles from Cardiff, Wales.
The tracker will remain live for the rest of the race, meaning fans can watch every moment of Legs 10 and 11 play out in real time.

Volvo Ocean Race Points Table after Leg 9
1. Dongfeng Race Team – 60 points *
2. MAPFRE – 59 points
3. Team Brunel – 57 points
4. team AkzoNobel – 48 points
5. Vestas 11th Hour Racing – 36 points
6. SHK / Scallywag – 29 points
7. Turn the Tide on Plastic – 26 points
* One additional point will be awarded to the team with the best elapsed time at the conclusion of the race in The Hague. Currently, Dongfeng would win this point.
** Should there be a tie on the overall race leaderboard at the end of the offshore legs, the In-Port Race Series standings will be used to break the tie.