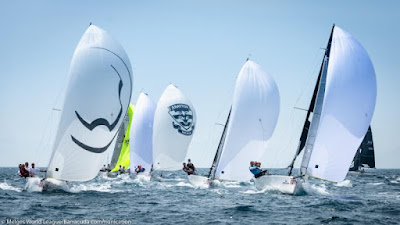 Lerici, Italy (June 21, 2018) - The International Melges 20 Class Association (IM20CA), fleet returns to action this weekend for the third round of competition at the 2018 Melges 20 World League in Europe. Lerici, along with event organizer Circolo Vela Erix, in collaboration with Comitato Circoli Velici del Golfo della Spezia will host the spectacular event taking place from Friday, June 22 thru Sunday, June 24. The relationships and location is very special as this is the home of the Melges 20 in Europe - and Melges Europe headquarters!

The stage is set and Lerici will prove to be a key event for many Melges 20 teams, especially those with high hopes for winning the World Championship that will be held during October in Cagliari. It is where the racing will weigh heavy in the Melges 20 World League ranking which is currently commanded by Vladimir Prosikhin's NIKA (Michele Ivaldi, tactician).
Prosikhin, currently ranked number one in the world, will be on the starting line in Lerici and poised to defend against the likes of Achille Onorato's MASCALZONE LATINO, JR., Filippo Pacinotti's BRONTOLO, Manfredi Vianinni Tolemei's MAOLCA and CALVI NETWORK with Carlo Alberini at the helm.
More than thirty teams are expected to be on the line for the Friday, 13.30 warning.
The Melges World League is supported by Helly Hansen, Garmin Marine, North Sails, Toremar, Lavazza, and Melges Europe in collaboration with Lerici Coast, La Lince, Consorzio Nautico La Spezia, Motorvela, Cantieri Canaletti and Comune di Lerici.
Melges World League has signed and adopts the code of ethics of the Charta Smerarlda strongly promoting the values of One Ocean Foundation.