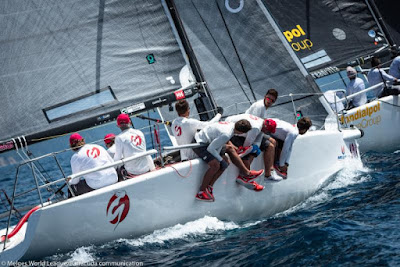 Scarlino, Italy (June 2, 2018) - Day Two of the 2018 Melges 32 World League in Scarlino has ended, and the provisional general classification shows an incredible balance between forces, making the final outcome uncertain and very open.
Starting at the top and respectively finishing the day in the following order, Vincenzo Onorato's MASCALZONE LATINO (Paul Goodison, tactician), Martin Rientjes' CAIPIRINHA (Gabriele Benussi, tactician), Christian Schwoerer's LA PERICOLOSA (Nic Asher, tactician) and Giangiacomo Serena di Lapigio's G-SPOT (Michele Ivaldi, tactician) possess 18-points each. It remains to be seen as to who amongst the top four teams will prevail, because not one single team has been able to totally dominate the Scarlino racecourse.
The points spread continues to be close as fifth overall World Champion Pavel Kuznetsov on TAVATUY, and Matteo Balestrero's GIOGI (sixth) are tied as well.
At first, it seemed as though it would be a day stacked in Onorato's favor. After a solid 2-1 performance in Race Four and Five, an OCS in Race Six was a setback. Ultimately, it cleared the way for Edoardo Pavesio's FRA MARTINA to find the finish line first, followed by Schwoerer in second, and Edoardo Lupi/Massimo Pessina's TORPYONE in third.
At the completion of six races, there are five named winners. Onorato has captured two bullets, while Rientjes, Schwoerer, Serena di Lapigio, and Pavesio have collected the other four.
The expectations are high and there is lots of uncertainty in place as teams prepare for the final day of racing on Sunday. If anything is certain, it is that there will be twists and turns as the winner will be determined from the four aces at the top.
Two final races are set for Sunday, with a warning scheduled for 12.00.
The Melges World League is supported by Helly Hansen, Garmin Marine, North Sails, Toremar, Lavazza, and Melges Europe in collaboration with Club Nautico Scarlino, Rigoni di Asiago, Resort Baia Scarlino and Scarlino Yacht Service.
Melges World League has signed and adopts the code of ethics of the Charta Smerarlda strongly promoting the values of One Ocean Foundation.
MEDIA AND RACING COVERAGE
As with all Melges 32 events around the world, racing updates will be posted online at the Official Melges 32 Facebook Page. Tune in for the latest racing information, results, video interviews, and photos. Race reports, press releases and photos will be available online each day post-racing at melges32.com.
TOP FIVE RESULTS (PRELIMINARY - After Six Races, One Discard)
1.) (ITA) Vincenzo Onorato/Paul Goodison, MASCALZONE LATINO; 1-2-[13]-2-1-12 = 18
2.) (ITA) Martin Rientjes/Gabrielle Benussi, CAPIRINHA; 3-1-7-[10]-2-5 = 18
3.) (GER) Christian Schwoerer/Nic Asher, LA PERICOLOSA; 6-4-1-5-[8]-2 = 18
4.) (MON) Giangiacomo Serena di Lapigio/Michele Ivaldi, G-SPOT; [9]-3-3-1-4-7 = 18
5.) (RUS) Pavel Kuznetsov/Evengy Neogodnikov, TAVATUY; 2-5-[11]-11-5-4 = 27
View Full Results