Volvo Ocean Race - Into the north 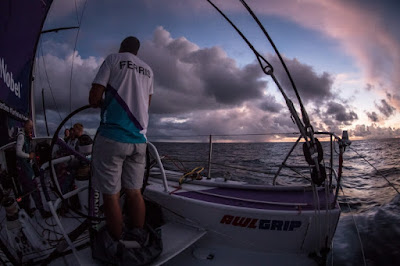 Just over a week into Leg 8 from Itajaí, Brazil, to Newport, USA, Charlie Enright’s American crew crossed into the northern hemisphere at 10:39:40 UTC followed closely by Team Brunel and Turn the Tide on Plastic.   MAPFRE, Dongfeng Race Team and team AkzoNobel joined their rivals in the north shortly afterwards leaving just Team Sun Hung Kai/Scallywag to make the transition at the 1300 UTC position report.


It is the last time the teams will have to cross the Equator – and deal with the dreaded Doldrums – in this edition of the race as the remaining legs all take place in the northern hemisphere.
Traditionally crossing the Doldrums – an ever-changing band of low pressure characterised by fickle winds and thunderstorms – in the west means a relatively unhindered passage, and compared to the previous crossings in this race, this experience has been relatively benign.
“We are in the dreaded Doldrums for the fourth and last time in this race,” Dongfeng skipper Charles Caudrelier said.
“Crossing so far west is not usually so hard, but today the Doldrum zone is big and you may see some changes in the ranking over the next 24 hours.
“For us each position schedule is a source of stress at this stage in the race. There can be unpleasant surprises and good surprises.
“The clouds are still a big challenge. If only we knew how to manage small clouds - right now we are under a huge one. Sometimes they bring rain, sometimes not. Sometimes strong wind, sometimes nothing.
“Playing with this cloud, we are moving west of the fleet, hoping for a bit more wind. For the moment there is a big gap to the leaders and we are a bit disappointed, but perhaps we will see better results tomorrow.”
On third-placed Turn the Tide on Plastic, skipper Dee Caffari was relishing the fight with rivals Vestas 11th Hour Racing and Team Brunel, the three teams separated on the water by just six miles.
However she identified a new threat to progress as her crew look to continue the match through the trade winds.
“We are sailing back in sight of Vestas, who are ahead and Brunel who are by our side,” she said.
“The three of us seem locked in battle. The only sad news today was that we saw our first sighting of the infamous Sargasso weed. We shall see if that will be our next challenge following the Doldrums.”
Spanish crew MAPFRE were slowed temporarily after discovering an electrical problem that left them with no power on board.
The team is now up to full speed having replaced a main battery fuse. But after jury-rigging a solution to move the keel, the team does not have the capability to control the movement from on deck.
“The fact that we have to use this system for the keel is tough because it means that one of us has to be below with the switch to manage the keel,” said Ñeti Cuervas-Mons.
“The person driving can no longer move it from up on deck. When we have to tack or gybe a lot, or when there is a lot of boat handling it is going to be problematic because we are one person down on deck, and whoever is driving cannot control it either…”
But since making the repair, the Spanish team has been gaining miles on the leaders and MAPFRE is now further north than Dongfeng, team AkzoNobel and Scallywag, albeit out to the east of their rivals.
Having now slipped to 67 miles behind the frontrunners, Scallywag were today trying to keep pace with their rivals.
However, with more than 3,000 miles of the 5,600-mile leg still remaining, spirits remain high on board.
“We’re behind the eight-ball a little and we’ve got our work cut out for us, but there’s plenty of miles left and a fair bit of scope for change in the weather,” Scallywag’s Luke Parkinson said.
“We’re not down and out, that’s for sure. We’re looking towards the end of the leg where we’ll have some fast sailing through the Caribbean, and as we get closer to Newport there’s a big park-up in the weather files at the moment.
“Currently it looks like it will all be to play for in the last three days, whether you’re first or last. We’ve just go to keep pushing until we get to that point, be as fresh and as ready as we can and wait for the opportunities.”