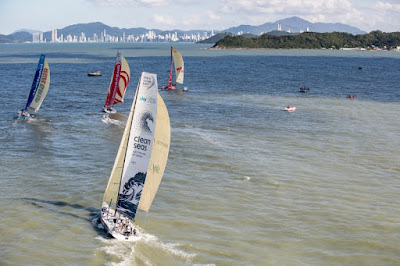 Six teams will be on the start line on Friday afternoon for the Itajaí In-Port Race in Brazil, with Vestas 11th Hour Racing joining the fleet following its dismasting, and subsequent repair and relaunching.    Team SHK/Scallywag, who only arrived in Itajaí on mid-afternoon on Thursday won’t be taking part as the team races the clock to prepare for the start of Leg 8.    This is the seventh event in the Volvo Ocean Race In-Port Race Series.


The Spanish MAPFRE team, skippered by Xabi Fernández, is at the top of the leaderboard for the series, with two race wins and three second place finishes to boast the most consistent podium results.   But just three points back is Dongfeng Race Team, winners of three races, but held back by one disappointing result in the China stop.

The two Dutch-skippered entries, team AkzoNobel and Team Brunel are battling for the final podium spot, with Simeon Tienpont’s AkzoNobel squad just one point ahead of Bouwe Bekking’s Brunel.    The Volvo Ocean Race In-Port Race Series acts as a tie-breaking mechanism for the overall race leaderboard. And with just one point separating first from second place after seven legs of racing, the results here could be crucial by the time the race finishes in The Hague at the end of June.

How to follow the Itajaí In-Port Race
Racing starts at 1400 local time (1700 UTC), on Friday, 20th April.
On the website:
Head to www.volvooceanrace.com to catch a live stream of the action from 1345 local time (1645 UTC). A post race story summarising the action and with quotes from the skippers will be posted shortly after racing has finished.
Check out Facebook Live:
We'll go live at 1345 local time (1645 UTC). You can go to our page to schedule a reminder so you don't miss it.
Check out Twitter Live:
Join the conversation on Twitter with the live broadcast at 1345 local time (1645 UTC) by visiting live.twitter.com/volvooceanrace and tweeting us with #volvooceanrace. We'll be live-tweeting the action, as well as broadcasting the race feed. Check it out as we share the best content from the teams, stakeholders and fans on our feed.
Join us on our live blog:
We'll be blogging all the moves, previews and news from the racetrack on our live blog, including the best of clips and social content, from 1330 local time (1630 UTC). You can find it at www.volvooceanrace.com under the 'Racing' section.
Download the app:
It's full of great content and fits on your mobile phone. Why wouldn't you want the official Volvo Ocean Race app? Head to the App Store or Google Play to download it. It's called Volvo Ocean Race.
Come down to the Race Village:
We’ve got a fantastic Race Village along the Itajaí waterfront, including the Volvo Ocean Race Boatyard facility, the Volvo Pavilion and Volvo Ocean Race Globe as well as the team bases. The Village is jam-packed full of interactive elements, innovative structures and loads of exciting things to do.