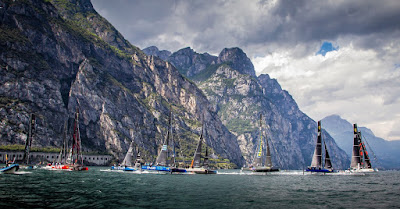 A record-sized fleet of foiling catamarans is set to descend on Lake Garda in northern Italy at the end of next month where crews from across the globe will fight to become the first ever World Champion in the GC32 one-design foiling catamaran class. This first official World Championship has come about following studious work by the GC32 International Class Association to gain itself 'World Sailing recognition' which it achieved last autumn.

The 15 boat fleet competing off Riva del Garda over 23-27 May represents the coming together of the two GC32 circuits: The GC32 Racing Tour, which comprises five events in top venues for foiling across southern Europe and the Extreme Sailing Series - an eight-stop global Stadium Racing championship, starting in Oman and finishing in Mexico.

"Having the opportunity to bring together the two fleets will make for some fantastic racing and a real spectacle," states Simon Delzoppo, President of the GC32 International Class Association. "There is a bit of rivalry between the GC32 Racing Tour and Extreme Sailing Series teams and it will provide a great opportunity for us to line up - people will really enjoy that. With 15 boats and the backdrop of Garda, it will be pretty amazing."

Delzoppo will be competing at the helm of his .film Racing. "The fact that it is a World Championship makes it pretty significant for teams like ours," he continues. "The first ever GC32 World Championship - it's a prestigious title to say you've won. That raises the stakes, which is why everyone is putting in a lot of effort. It is something which people are getting very excited about."

This first World Championship will feature all the titans of the GC32 class. From the Extreme Sailing Series, this will include season winners - SAP Extreme Sailing Team, which came out on top in 2017 with Adam Minoprio steering and Ernesto Bertarelli's Alinghi, winner in 2016. Others include Oman Air, helmed by Phil Robertson, winner of the last year's GC32 Championship in Muscat.

On the ascent will be Roman Hagara and Hans Peter Steinacher's Red Bull Sailing Team with America's Cup skipper Chris Draper taking over the helm this season. Hagara, a past Tornado World Champion, is looking forward to the event: "It is definitely one of the best places to sail in Europe, because of the nice wind there. I am looking forward to seeing more boats on the start line." And of this year's crew changes he adds: "Definitely it is getting harder and harder in the class and we were looking for some different guys who have experience on the foiling boats."

Realteam skipper Jérôme Clerc is eagerly looking forward to the Worlds. "It is one of our main goals this season. It provides us with the opportunity to race against the other GC32s and it would be good to be World Champion! We are training hard for this."

Last week Realteam announced its plans for 2018 plus it's crew line-up which includes new recruits Benjamin Amiot and Artur Cevey, both experienced GC32 sailors. Over the winter they had a 12-day training session in Barcelona and will have six extra days in Riva del Garda prior to the Worlds.

The Extreme Sailing Series' most successful skipper Leigh McMillan returns as helmsman for the Land Rover BAR Academy team. Last season he was calling tactics on .film Racing on the GC32 Racing Tour. McMillan has not competed in a World Championship since his Olympic sailing days a decade ago, his best result having been second at the Tornado Worlds in 2005. He last raced on Lake Garda even longer ago. "I am pretty excited to be going back. The wind can be pretty amazing if it does its thing and comes in like clockwork. Having winds in the high teens will be exciting stuff."

McMillan will be leading a team of young British sailors from British America's Cup challenger's Academy, however, all are experienced dinghy sailors and many, such as Oli Greber and Will Alloway, have already spent time in smaller foiling catamarans. The aim is to train up the next generation who might then feed into Land Rover BAR's race boat crew. "With some guidance from me, hopefully, we can gel it all together and make some big strides forward," says McMillan.

So how will the GC32 Racing Tour and Extreme Sailing Series teams fare? The latter will arrive in Riva del Garda more 'race ready' has already had an event this season in Oman, which was won by Alinghi. The GC32 Racing Tour teams will be greener but with the advantage of being more familiar with Lake Garda, the Tour having started its last two seasons there.