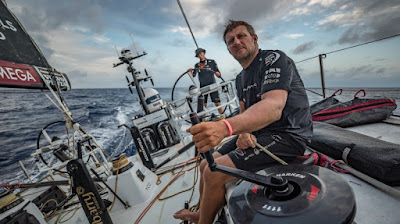 
“This is the worst situation you can imagine happening to your team,” said SHK/Scallywag Team Manager Tim Newton, who has spoken with skipper David Witt and navigator Libby Greenhalgh about what happened on Monday.
“We are absolutely heart-broken for John’s family and friends. I know for David, he has lost his best friend. It’s devastating.”
Newton says he asked the crew to put together a timeline of events to ensure accurate reporting on the incident and it follows here:
• On Monday, 26 March, SHK/Scallywag was racing in Leg 7 of the Volvo Ocean Race from Auckland, New Zealand to Itajai, Brazil, approximately 1,400 nautical miles west of Cape Horn
• Weather conditions were 35-45 knots with 4 to 5 metre seas with showers reducing visibility. It was 15 minutes before sunrise
• The team was sailing with a single reef in the mainsail and the J2 jib. The Fractional 0 (FR0) sail was hoisted but furled
• At roughly 1300 UTC SHK/Scallywag surfed down a large wave leading to an accidental crash gybe
• John Fisher was on deck, in the cockpit. At the time, he was moving forward to tidy up the FR0 sheet and had therefore unclipped his tether
• As the mainsail swung across the boat in the gybe, the mainsheet system caught John and knocked him off the boat. The crew on board believe John was unconscious from the blow before he hit the water
• He was wearing a survival suit with a wetsuit hood and gloves and a lifejacket
• The JON buoy and the horseshoe buoy were thrown off the back of the boat to mark the position
• It took some time to get the boat under control and motor sail back to a position near where the man overboard occurred
• At 1342 (UTC), the team informed Race Control, by email, that there was a man overboard and they were returning to the MOB position to start a search pattern
• With input from the Maritime Rescue Coordination Centre and Race Control in Alicante, a search and rescue operation was carried out for several hours but there was no sign of John, the horseshoe buoy, or the JON buoy
• With weather conditions deteriorating, a difficult decision was taken to abandon the search and preserve the safety of the remaining crew
Newton says the team is distraught but has a clear focus on getting the crew and boat back to shore.
“This situation isn’t over yet for our team,” Newton said. “The conditions are extremely challenging, with strong winds and a forecast for a building sea state over the next couple of days. Our sole focus, with the assistance of Race Control in Alicante is to get the team into port safely.
“Once we have achieved that, we have time to de-brief more fully and ensure that any lessons that can be learned from what happened to John are incorporated by the rest of the fleet going forward.
“That would be a tremendous legacy for John, who spent so much of his time passing the learnings from his lifetime of experience at sea onto the younger sailors on our team.”