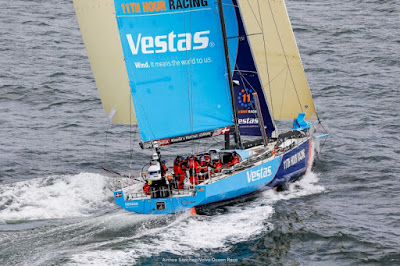 A third place finish into Melbourne on Leg 3 of the Volvo Ocean Race has Vestas 11th Hour Racing on equal points for second place on the overall leaderboard.  Leg 3 was a difficult challenge for the Volvo Ocean Race fleet, a 6,500 nautical mile test of the crews and the boats that took the sailors down to the Roaring Forties, the Southern Ocean, where storm force winds battered the fleet for most of the leg.

Just after crossing the finishing line, Mark Towill, team director and co-skipper acknowledged the scale of the achievement:
“It was a tough leg. We’re happy to be on the podium again. It’s great to be in on Christmas and I know we’re all looking forward to getting ashore. It was a difficult leg, hard on the bodies, but everyone has held up well.”
The Vestas 11th Hour Racing crew finished behind Dongfeng Race Team but ahead of Team Brunel. At one point, with about 36 hours to go, the race tracker showed nothing to choose between Vestas and Dongfeng in terms of distance to finish, but in reality, the tactical situation favoured the Chinese/French boat.
“It was looking pretty close for a little while, but they were always ahead,” Towill said. “They were always comfortable. Brunel sailed well too so credit to them. It was challenging conditions and we’re all happy to be here and in one piece.”
For Team Brunel, this is a second consecutive mid-fleet finish. Skipper Bouwe Bekking knows it keeps his team in touch with leaders, but time is running out to make a charge for the podium on the overall leaderboard.
“It’s been a really hard leg. We always expected it would be tough and it lived up to that,” Bekking said. “Plenty of breeze and some awesome sailing as well.
“We don’t have any big issues. We could start for Leg 4 in 10 minutes! The boat has done incredibly well.”
Bekking also revealed that Annie Lush, injured earlier in the leg, has been taking light shifts on deck over the past couple of days, great news about one of the toughest sailors in the fleet.
As on Leg 2, the winner this leg was the Spanish MAPFRE team, followed by Dongfeng Race Team in second place.
Interestingly, Team Brunel did post the best 24-hour run so far on this leg, at 538.1 nautical miles, for an average speed of 22.4 knots. And that happened just yesterday.
“We had an excellent day on board TeamBrunel in many ways,” Bekking wrote in his daily email on Sunday morning. “Not enough to overtake Vestas, but we haven't given up, we know strange things can happen…”
And that may well be his philosophy the rest of the way. Don’t give up; keep the pressure on, strange things can happen.
That means three boats will remain at sea for Christmas, with SHK/Scallywag battling to the end with Turn the Tide on Plastic for fifth place. Their ETA is currently around 0400 UTC on December 26.
Team AkzoNobel, with over 550 nautical miles to go at this point, isn’t expected to finish in Melbourne before 0800 UTC on December 27.