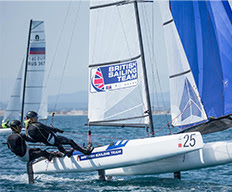 Ben Saxton and Katie Dabson have claimed gold at the first ever foiling Nacra 17 World Championship, which drew to a close in dramatic fashion at La Grande Motte, France on Sunday (10 September).   The mixed multihull duo are the second British Sailing Team crew to be crowned World Champions in the space of a week, with Dylan Fletcher-Stuart Bithell winning the 49er world title in Portugal last weekend.

And Saxton and Dabson’s are only the second set of names ever to grace the Nacra 17 World Champion roll of honour, with France’s Billy Besson-Marie Riou the only previous titleholders in four previous editions since the class’s introduction in 2013 in its pre-foiling era.
“It’s unbelievable. It’s every dream come true!” said Rio Olympian Saxton after the medal race.
“I’ve never been an Olympic classes World Champion before. Well done to Katie, and thanks to our coaches Hugh and Derek and to National Lottery funding from back at home. It’s awesome!”
Saxton and Dabson went in to the final day of competition wearing the yellow leaders’ jerseys, but with two fleet races still to go to determine qualifiers for the top ten medal race positions, there could be no let up, with Saxton admitting that the successes of his British 49er colleagues last week was spurring him on.
He laughed: “I thought if Dylan and Stu can do it and James and Fynn got a medal as well then I thought I’d better buck my ideas up!”
Saxton and Dabson picked up 10,11 from their two final fleet races to book their place in the medal showdown in second place, but with the top three crews from Italy, Britain and Spain effectively all level-pegging in the chase for gold.
After a short delay, the medal race got underway in gusty and shifty 20 knot conditions, with drama unfolding as early as the first mark with a collision between the series-leading Italian crew of Ruggero Tita-Caterina Banti and the second Spanish boat of Iker Martinez-Olga Maslivets resulting in the Spaniard’s rig collapsing and neither boat able to finish the race.
The Italian crew were out of contention for gold, but it was far from over for Saxton and Dabson, who had Spain’s Fernando Echavarri-Tara Pacheco breathing down their necks in the Championship chase.
Saxton and Dabson crossed the finish line in second place behind Germany’s Paul Kohlhoff-Alica Stuhlemmer but narrowly ahead of the Spanish team, and it was enough to hand them the victory in what was only their third regatta together.
“We had two races this morning and they didn’t go completely as we’d have liked them,” Dabson explained.
“We’d have quite liked to have a bit more of a gap but we went into the medal race pretty much with whoever won the medal race out of the top three would have won, so we had a little bit on, but we kept our cool and raced our boat. We knew what we had to do and we went out and did it.”
“We had about every emotion going,” Saxton added. “We didn’t have a great start so we were playing catch up and got back in to it down the first run. Fernando and Tara then overtook us going up the second beat and we went for it down the last run and we got them."
John Gimson and Anna Burnet also made the cut for the final medal race, finishing sixth overall, with Tom Phipps-Nikki Boniface finishing 16th, Chris Rashley-Laura Marimon 18th and Rupert White-Kirstie Urwin 25th.
Full results from the 2017 Nacra 17 World Championship
At Hungary’s Lake Balaton earlier on Sunday, however, there was disappointment for Ed Wright in his quest for a second World Championship title at the Finn Gold Cup.
Bournemouth’s Wright sailed a solid week amid testing conditions and two days lost to lack of wind, to qualify for the medal race in the silver medal position.
But a sixth place in the ten-boat medal final race meant Wright narrowly missed out on the podium spots, finishing on equal points with the Netherlands’ Nick Heiner but missing out on the bronze on countback.
Sweden’s Max Salminen took gold, with silver going to France’s Jonathan Lobert.
“It’s been a very eventful regatta,” Wright surmised. “I started off very well but then managed to get myself a bad result in the second race which was kind of a noose around my neck the whole week.
“It was very difficult to try and be extreme at all, and here it definitely pays to be extreme because sides of the course come in and if you’re not there then you kind of get left behind.”
He continued: “I think I managed pretty well to go into the medal race in silver medal position and actually I thought it might be time for another Gold Cup win. I felt good and my speed was good as well. I just got a bit unlucky on the start. I wasn’t really that punchy.”
“Heiner got away and if he won the race I needed to be pretty high up – fifth and I was sixth so it was pretty close. It’s impressive that the whole top four finished within three points of each other. It was very good, close racing and it’s just a shame that I was the unlucky one.”
The British Sailing Team’s Henry Wetherell concluded the event in 12th, Ben Cornish was 21st, Pete McCoy 41st and Hector Simpson 46th. Full results from the 2017 Finn Gold Cup
(www.rya.org.uk)