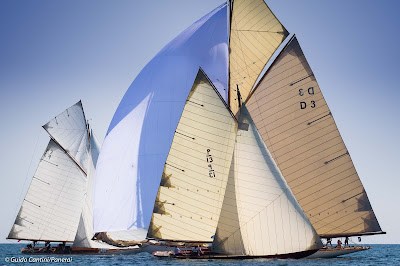 A good breeze of around twelve knots and flat seas made for an ideal setting of day 3 of the Régates Royales de Cannes - Trophée Panerai.  Classics had their double-lap triangular course set in the Bay of La Napoule, with the overall scoreboard taking a more defined shape. In the Juan Gulf the air was lighter and shifter, forcing the Race Committee to wait until the early afternoon to be able to launch two races for the Dragons, the 5.5 and the Tofinous.


The weather pattern was no different today - light in the morning, developing into a south-easterly, increasing to 12-14 knots later in the afternoon, the third episode of the Régates Royales - Trophée Panerai was characterized by a steadier and stronger wind, putting tacticians, navigators and sailors’ skills to the test.

It was Mariska to cross the finish line in first among the big boats, the 23 Metre Cambria and the others unable to keep her pace, piling up more valuable points and increasing her margin after three races. Similarly, other longer and more powerful boats, like the Italian Maxi Il Moro di Venezia showed that quality counts more than age. The two 12 Metre France and Chancegger seems to like stiffer winds better, as do the One Tonners Ganbare (1973), Resolute Salmon (1976) , Sagittarius (1974) and Galvana (1975).

In the Marconi class, Argentinean Daniel Sielecki’s Cippino got a win on  Brendan Mc Carty on Rowdy with Leonore skippered by Mauro Piani in third on both the day’s and the overall results board. Angelo Mazzarella’s Carron II despite a second place in today’s race, won by German Frers’s Fjord III, is still on top of the smaller Marconi scoreboard.  Weather conditions are expected to further improve tomorrow, with slightly stronger winds.

A Russian-British duel
After some waiting, a light breeze also set on the Juan Gulf where the race course is set for the Dragons. Two crews were caught over the line with a black flag and were therefore disqualified: French Stéphane Baseden on Outlaw and Russia’s Vasily Senatorov on Even Better. The fight for victory was, once more, a thing between UK’s Yvan Bradbury on Blue Haze and Russian Anatoly Loginov on Annapurna. The day’s second W/L race further confirmed the leadership by the two crews, who will more than likely finish on the series’ podium, finishing tomorrow, while Germany’s Pedro Rebelo de Andrade on Pow Wow, France’s Jean Bréger on Ulysse, British female skipper Gavia Wilkinson-Cox on Jerboa and Russia’s Igor Goikmberg on Zenith can still aspire to the bronze.