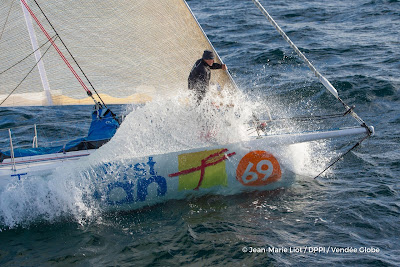 This afternoon at 0330hrs UTC and whilst TechnoFirst-faceOcean was sailing in a strong 30 knots of wind with three reefs in the mainsail and the J3, with her skipper inside, a rogue wave put the boat on her side, mast in the water.    "We've just capsized like a dinghy. I was standing on the cabin top inside and was absolutely dead certain that we were going over. But after a few seconds, she slowly came back up right. It was like a miracle really," said a shaken Sébastien minutes after the event.


A quick check of the boat reassured the skipper that nothing major went wrong during the incident however a thorough inspection will be done at day break. The boat is back to sailing mode. However she is now sailing 15 degres lower to have a better angle with the waves.

In two cruel days the hopes of the Vendée Globe’s two top rookies have been dashed by mechanical failures. On Sunday afternoon it was the 35 year old race first timer Thomas Ruyant who was forced to abandon his race after 42 days while lying in eighth place. His seamanship in bringing his badly broken IMOCA, which threatened to break up and sink at any minute, 220 miles through some horrendous weather conditions, writes him into the race’s history books.
Paul Meilhat’s mechanical failure, a 40cms (15 inch) crack in the keel ram, thankfully has not had the same dramatic impact as Ruyant’s self rescue, but the outcome in the meantime is as cruel for the gifted, fast learning 34 year old from Lorient who already had one foot on the Vendée Globe podium. Meilhat has had to route north, leaving the optimum east-going route, and considers his race over, with the future destination as yet undecided aboard SMA, the record breaking 2012-13 race winning boat.

After the retirals of Morgan Lagravière (Safran) back on November 25th, Ruyant yesterday and the re-routing of Meilhat, this has not been a good edition for the ‘bizuths’ – as the French call race first timers. The keel ram, which weighs 90 kg has a 15 inch crack in it, which makes it impossible to repair at sea. His team said, “After the incident happened the most important thing was ensuring the safety of the boat. Without its ram the keel would be free to swing from side to side at 45° to the boat, which could easily threaten the structure of the monohull in certain conditions.”

The skipper – who had been racing side by side with friend and rival Jéremie Beyou (Maître CoQ) – for 25 days  reported this morning: “I made the keel secure using the blocking system and I stowed the sails, as I had a lot of sail up. Since then, I have been heading towards the NW to get away from the violent winds. I haven’t yet determined my route, as this will depend on the weather in the next couple of days. With a keel like that, I wouldn’t make it around Cape Horn. I wouldn’t feel safe, so I secured everything for the boat and myself.”

There is no immediate danger with the keel fixed in place, but any heavy seas could lead to a series of events and much more serious damage. Meilhat will choose his destination based on the weather. “New Zealand is the closest land 1900 miles away. The problem is that would mean quite a lot of upwind sailing in deep lows, which would be dangerous for the boat. I’m heading towards the NW for the moment and depending on the weather in two or three days, I will choose whether to head for New Zealand or up to Polynesia.”

The decision to head away from what was his initial goal is the only safe option and Meilhat is well aware of that, in spite of the disappointment. “I’m keeping myself busy,” he explained yesterday evening. “I don’t want to think about it too much for now. I have at least a week of sailing to do to come to terms with that. It’s really hard going from a state of mind where you are giving it your all to this doubting. I am trying to get things into perspective and doing what is required to ensure the safety of the boat. It’s not yet over. It’s still a worrying time for me.”

The skipper of SMA added, “As for the race itself, it’s hard, but it will take a while for it to sink in. This is a race that is not like any other. I had really entered a world I didn’t know before and found a different mindset. It’s going to take time to get back to normal.”

Warriors Wrestling
Two of the toughest, older warriors in the fleet, Nandor Fa in ninth and Enda O’Coineen in 14th are having to dig deep. Ex-wrestler Fa is now very much on his own, with 620 miles ahead to Louis Burton (Bureau Vallée) in front of him and 503 miles behind to Conrad Colman (Foresight Natural Energy). The Hungarian skipper, who finished fifth in the second edition of the Vendée Globe, was knocked flat and fought for some time to get his boat and race back on course.

Fa said: “I’m just over my most difficult night in the race so far. A 40-knot gust knocked over the boat. I jumped to furl up the reacher, with which we’ve been progressing perfectly until that moment. I was still winching the sheet when another sudden gust hit us and made the boat gybe. I was in hell. A huge wave swamped us from the back which came into the cabin as of the doors was open - luckily just one. By the time I was finished with the whole chaos. I furled the J2 and sat down on the beanbag. Just a few minutes later I was alarmed by a loud noise and the boat being knocked over. Afterwards I crawled into the cabin, soaking wet, trying to change my sodden clothes. Then I sat next to the galley to eat something. As I was sitting there, the boat suddenly stopped in a wave and my flying in the boat was stopped by the chart table, having my ear smashed. My ear was throbbing like it was hanging off, just like back in the days when I was a wrestler. This was all I could take. I screamed out, swearing and cursing like a madman, I was so angry. But I pulled myself together. I ate something, hauled myself on to the beanbag and passed out.”

“At dawn I was awakened by huge silence. I got up to see what’s happened. Every single part of me was in pain. Somehow I got to the companionway door to see that everything was all right, we were sailing in the right direction. It just seemed too silent and serene after all the drama and noise. After breakfast I saw that the power was too low, so I started the engine. A few minutes later I heard a hissing sound. I already knew what it was: The engine was cooked. I grabbed the tools and started to repair it. It took two hours. After that, the engine has an even sweeter, more beautiful sound than before. So, this is how I entered the Pacific on 20th December at 09:30 UTC.”

O’Coineen is sailing ‘in the dark’ with limited comms and navigation instruments. After crossing Cape Leeuwin among the peloton of five skippers who passed the longitude of the second great Cape within 13 hours of each other, O’Coineen admits he has some considerable trepidation about his passage into the Pacific, but ever stoic and positive, he reiterates that this is the challenge he has come to take on. His lack of internet connection and email means he gets a weather update from Race Direction at midday each day by phone as well as the positions of all of the boats around him.

Similarly, Jéremie Beyou, who lies third now, gets a text only forecast by Skyfile as his only source of weather information. But despite his lack of communication tools, the Irish skipper who wrote an autobiographical book, ‘The Unsinkable Entrepreneur’ still could not help himself from doing business! He almost certainly became the first Vendée Globe skipper to buy and sell pubs or bars during the solo round the world race. O Coineen said today:

“I do miss the connectivity, the being able to go on the internet and see what is going on, to see what is happening with other things in the world. Even so I have been doing a little bit of business over the phone. I actually managed to sell an interest in a pub and buy an interest in a pub in the same day. That is something I said I would not do, but there you are. I am an amateur sailor sailing around the world. I will have earned my spurs when I get around.”
Following Meilhat’s diversion north away from the race course, Jean Pierre Dick (StMichel-Virbac) is now up to fourth place 430 miles behind Béyou and 250 miles ahead of the duo Yann Eliès and Jean Le Cam who are now 38 miles apart.
Quotes
Pieter Heerema (NED) No Way Back: “I am completely wasted. I have had three wipe outs. I have had crash tacks, the sails flapping, the boat flat in the water, an enormous mess, an avalanche of stuff through the boat three times, sails flogging. It has been a disaster. And it is the same problem I have had nearly since the start. I am at this moment on the back up autopilot which I have some questions about because I have never had a chance to use it. There are certain functions which I don’t know if they are in it. My plan is to just trundle along very very slowly. I have food enough for 140 days. And if need be I just cruise. I am doing 10 knots right now, I am doing 53 per cent of polars, it is fantastic circumstances, I should be at 18 to 20. But if needs be, I take it easy and get home that way. It is very sad. That is not the Vendée Globe.”
(www.vendeeglobe.org)