Vendée Globe - LE CLÉAC’H AT THE HORN, THOMSON IN THE COOLER 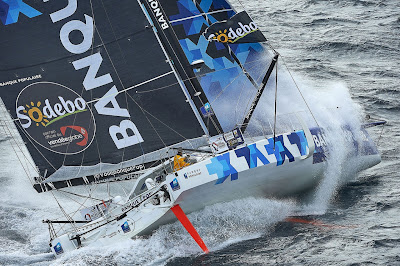 Armel Le Cléac’h achieved the first of his main goals when he lead the Vendée Globe out of the Pacific Ocean today. The French skipper, who continues to exhibit his absolutely single minded determination had the briefest of smiles and a salutary champagne moment as he passed seven miles south of the legendary rocky island, leaving the Big South carrying a lead of over 760 miles ahead of second placed Alex Thomson (Hugo Boss), the sole British skipper in the race.


When he passed Le Cléac'h (Banque Populaire VIII) established a new race reference time from Les Sables d'Olonne. His elapsed time is 47 days and 32 minutes, smashing the 2012-2013 record of François Gabart by 5 days 5 hours and 38 minutes, set during the last edition. After racing 17,480 miles making an average of 15.5kts since the start, the Banque Populaire VIII solo skipper passed Cape Horn at 1234hrs UTC, completing his 3,2,1 progression in successive Vendée Globe races. It is the first time he has led at the Horn, rounding third in 2009, and second by two and a half hours on January 1st 2013. Le Cléac’h makes the significant left turn, ready to climb back up the Atlantic, in moderate, favourable breezes, and enjoyed blue skies and a distant sighting of the island that marks the southern tip of South America.
But not for him was there a visible sign of any real emotional release as he bid adieu to the Big South, perhaps in part because it has proven slow and relatively benign – more head scratching than sinew stretching - compared with the duel, the hand to hand combat with his nemesis, Gabart during the 2012-13 race. During that race the top duo traded the lead fifteen times between Cape Leeuwin and Cape Horn. When Le Cléac’h crossed the Horn today he had monopolised the race since three days before Leeuwin. “It was an objective for me before the start to round the Horn in front.” Le Cléac’h said, “I knew that was going to be important for what lies ahead. Four years ago, I was just behind François. It’s nice to get away from the Southern Ocean.”
Speaking to Gabart on Vendée Globe LIVE! Le Cléac’h said: “It’s hard to compare with four years ago. I think (this time) we had tougher conditions in the Indian Ocean. It was colder down by the Kerguelens, whereas the ice gates (in 2012-2013) were quite some way north. Then, we had two deep lows under Australia, when we had to go to three reefs. I can remember that four years ago, I didn’t need to do that very much. So a rougher Indian and a more complicated Pacific than four years ago in terms of strategy and dealing with transitions.” He continued: “This afternoon I’ll be looking at the strategy for what lies ahead in the South Atlantic. It’s a bit complicated as we can’t always rely on the weather models here. We can imagine a big lateral separation with Alex in the South Atlantic. It should be fairly quick today, but the wind is set to ease tomorrow.”
As Le Cléac’h opened his champagne, Thomson was sailing not downwind but upwind at the coldest and most southerly point of his entire Vendée Globe so far, 56 degrees south within 60 miles of the Antarctic Exclusion Zone. The breeze does look set to veer for him and he should get some starboard gybe reaching towards the Horn though that looks to be more and more downwind as he approaches. The British skipper has remained silent in recent days as his comms satellite receiver is often blanketed by his mast and sails, but his team reports that he remains grimly determined to reach the Horn, and the release to go north, as fast as possible.
Christmas on the race course will start tomorrow (European Saturday) for the skippers west of the dateline. Romain Attanasio – still nearly 600 miles west of Leeuwin - has decorated the inside of his Famille Mary Etamine du Lys. In ninth place, Nandor Fa told today of his passage close to Campbell Island today, also recently passing a mental milestone south of New Zealand, where he and Conrad Colman had to stop in 2015 during their Barcelona World Race overcome by rig and keel problems which they had to fix in Bluff, where Thomas Ruyant is presently. Fa will share Christmas with his family on the phone. “I have been at sea for five Christmases. It is quite a lot. And in fact I am someone who loves to be at home with the family at Christmas. It is the fifth time I have been in the south at Christmas. Tomorrow I will call my family in European time and spend some time with them on the phone and I will make some Christmas here on board. Part of me will be there with them in Hungary,” said Fa.
Meantime Gabart recalled his Christmas racing in 2012 – close to Point Nemo – where he said today he never felt more disconnected: “Four years ago Christmas was the moment  when I felt most distant from all the problems and worries ashore. We were on the other side of the world busy taking care of the problems on our boats. Then when you talk to people ashore they are all talking about Christmas. We realise that we’re in a different world then. It is when you get to Cape Horn that you get back to civilisation. You can see land. You can talk on the VHF to the lighthouse keeper.”
Stéphane Le Diraison announced his official abandon, saying: “My aim in competing in the Vendée Globe was to take up a personal challenge, to push back my limits. I definitely achieved that and it has been beyond all my hopes. Setting out was in itself a victory and sailing 12,000 miles in 41 days and crossing the Indian Ocean in eleven days rewards my work and determination. This experience has allowed me to find myself and to learn a lot. I have been through some horrible moments, but from a human perspective, you find resources deep down you didn’t know you had. Technical problems are part of this race. I chose to take part understanding the terms and conditions. I had to cope and deal with things by myself, whatever happened. I’ll finish taking the boat to Australia and I’ll come home strengthened after overcoming all the hurdles.”Quotes


Jean Le Cam (Finistère Mer Vent): "Armel (le Cléac’h) has had the perfect score since the start. Setting off with the right wind, no hold ups in the South Atlantic. The whole of the Southern Ocean at twenty knots. Well done. No mistakes. To think that it was only a few years ago that de Kersauson wanted to smash the multihull record in the Jules Verne Trophy to take the time to under eighty days. I have never been around in eighty days, but maybe I’ll manage it this year. The idea here isn’t to catch Yann. We’ll get to the Horn and then see what happens. We should be at the Horn in a week from now. Then, it’s indicator on and turn left.”
(vendeeglobe.org)