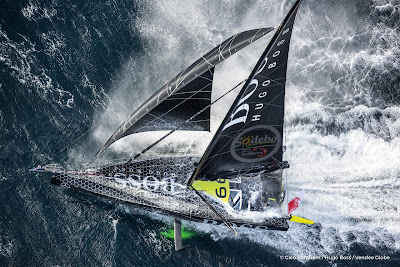 Since the solo non stop race was first raced in 1989, Thomson becomes the first skipper across all eight successive editions, to round Cape Horn on Christmas Day. He lies in second place behind Armel Le Cléac’h, passing the Horn one day 23 hours and 08 minutes after the French skipper rounded on Friday at 1234hrs UTC. Since Le Cléac’h rounded just after midday Friday, Thomson has seen the leading margin slashed from 818 nautical miles to a much more tenable 442 nautical miles at 1400hrs UTC this Sunday, Christmas Day.

Pieter Heerema (NED) (No Way Back): “The weather is great I am going slow intentionally steering into the high pressure, because I have a huge list of things to be done which can only be done in a calm situation. I had repair the mainsail with ten patches. I have repaired three cars, on the mainsail track. The going is slow but the circumstances are fantastic. It is like a holiday cruise right now. I have let go my thoughts of the race right now. This comes as a welcome chance to prepare the boat for the Pacific. I am not completely ready but should be by the end of the day and then thereafter it is just keeping fingers crossed that a solution is found to the autopilot problems. If not then that is another reason to be in the north, because I look for a harbour in Australia and put the boat on a freighter back to Europe. Without an autopilot it is just not doable. I am not going back into the Southern Ocean without a working pilot. I have no idea what I am doing with the software.”
(www.vendeeglobe.org)