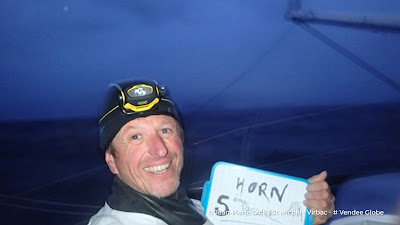 No solo or short-handed sailor has completed as many round the world racing miles as Jean-Pierre Dick in the last decade. The French skipper, who took up solo racing in 2002 after winning the fully crewed Tour de France a la Voile, rounded Cape Horn for his fifth time racing this morning at 0634hrs UTC. In the pre-dawn half light, with the familiar silhouette of the iconic rock barely visible, and in strong breezes, Dick passed into the Atlantic Ocean in fourth place in his third Vendée Globe.


Sébastien Destremau (TechnoFirst-faceOcean): “Conditions are fine with twenty knots of wind on the beam. It’s much better than it has been when the boat was slamming a lot. Conditions should remain favourable to New Zealand. I should be able to make gains in the right direction without pushing too hard.  Christmas and the New Year are a bit tough. This hasn’t been the best week of my race. You really feel alone at this time of year. Everyone else is celebrating, getting presents, drinking and here we are all alone. I intend to stop in New Zealand to carry out a thorough check-up, unless I get close to Tasmania, in which case I’ll stop there. But conditions are currently good to New Zealand, whereas in a few days from now they won’t be.”
(www.vendeeglobe.org)