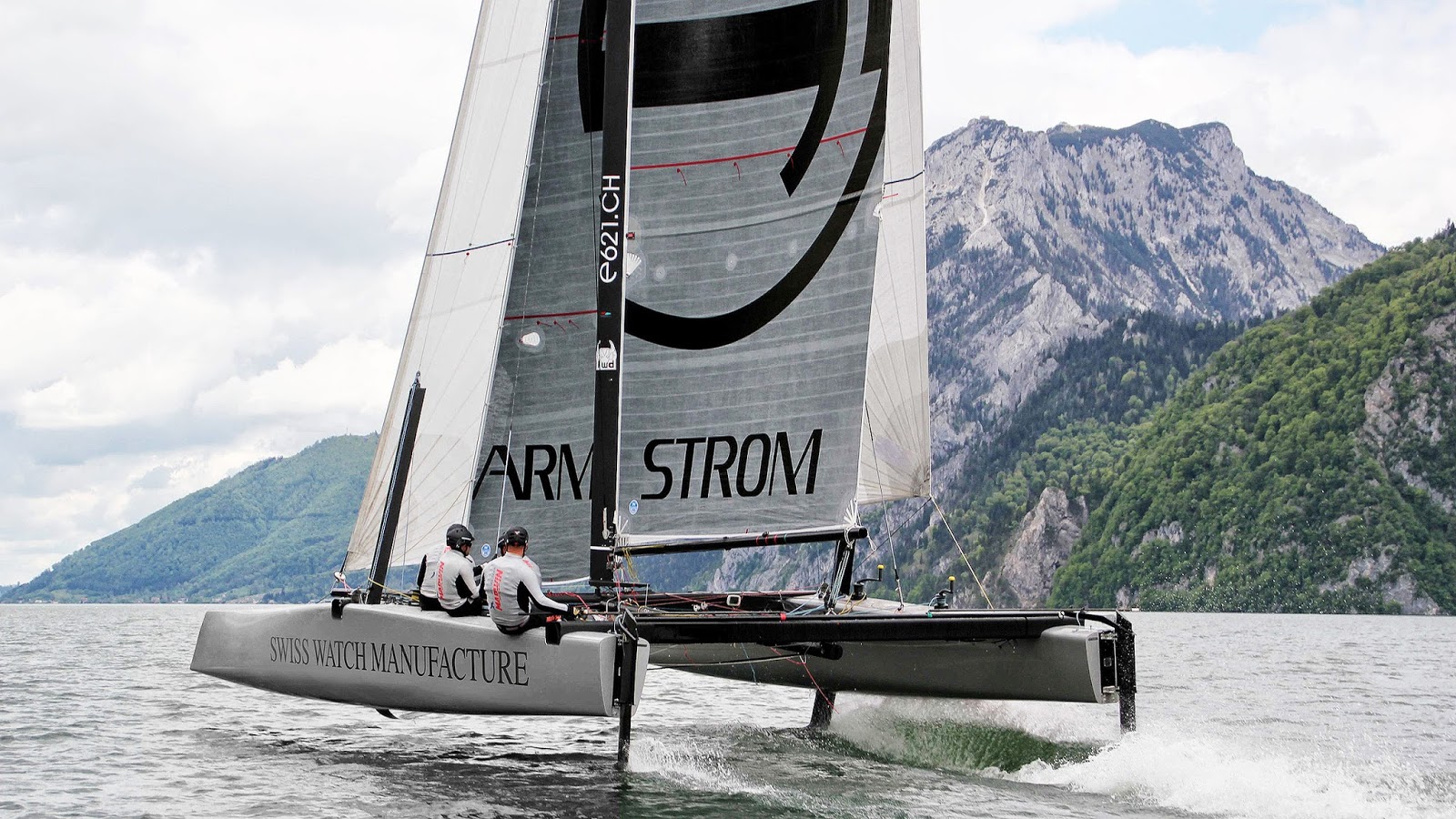 ARMIN STROM Sailing Team is pleased to announce its racing program with the just upgraded GC32 full foiling catamaran, the twin-hulled elite of sailing. The newest version of the GC32 foils 1.5 meters above the water and is capable of over 20 knots upwind and more than 35 knots downwind - a new era for this promising boat.


Unveiled last week, with the new boat the Swiss sailing team and the independent watch manufacturer share their passion in the most innovative technology available in their worlds. The latest GC32 catamaran represents the pinnacle of evolution in sailing, flying over the water thanks to its innovative L-shaped lifting foils and T-shaped rudder. It is no coincidence that several America's Cup teams will attend the inaugural 2014 GC32 event starting this week.

The 2014 official class calendar opens with the GC32 Austria Cup on Lake Traunsee in Austria on May 28 - June 1, followed in July by the GC32 Land Rover Cup in Kiel, Germany. In August by the GC32 Italian Cup in Rome and in September by the GC32 France Cup in Marseille. The busy agenda of ARMIN STORM Sailing Team includes other regattas and events: the Geneve-Rolle-Geneve (June 7th), Geneva Lakes’s Bol d’Or Mirabaud (June 14th) and The Foiling Week in Malcesine (Italy, July 10-12).

ARMIN STROM Sailing Team will be reinforced in its Austrian debut with three high calibre sailors flanking Olympian Starboat sailor Flavio Marazzi (SUI), Keith Swinton (AUS), Diego Stefani (URU) and Tudur Owen (URU).
Flavio’s appointment to the team is a natural step for the Swiss sailor after spending last year competing with the GC32 in several regattas around Europe and in the Starboat at the inaugural event of the Star Sailors Leagues Finals.

Make sure to be online at www.gc32.at by 12:00 GMT since Wednesday 28th May with your Pc/Tablet/Mobile to watch the live feed on the events official website homepage.

Flavio Marazzi:
“When I was looking at faster more exciting boats after my Olympic sailing career in the Starboat, I was immediately convinced about the newly launched GC32 class in 2013. With the latest updates on foiles and rudders, this boat became the most fascinating one design racing machine in the coming years.
Of course, it’s not the first boat I’ve sailed, but it’s the first time I’ve had the chance to work with a really modern type of catamaran. The latest boats I sailed were the Star and the 5.5m International, but the GC32 is a different challenge because you have to understand and work with a complex and "turbo charged" machine. Now success in sailing is heavily dependent upon innovation. It’s great to be involved in such a unique project and I look forward to seeing the reaction of the public. In having the ARMIN STROM Swiss Watch Manufacture on board this year means a lot to me and here in Austria we will both enjoy performing close to our home crowd. Here at the sailing team we are keen to repay the confidence ARMIN STROM has shown in us.”