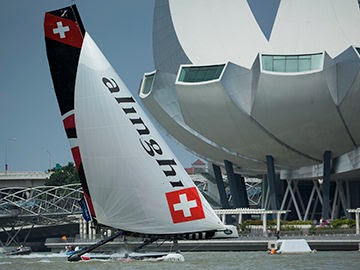 An estimated 30,000 spectators watched over four days, as Ernesto Bertarelli's Swiss team Alinghi sailed a near perfect regatta, with Morgan Larson, Stuart Pollard, Pierre Yves Jorand, Nils Frei and Yves Detrey, finishing more than 50% of the 29 races in the top three.  The team had the Act wrapped up before the final double-points race - a feat rarely seen on the circuit.


"We couldn't have dreamed for a better start," commented an ecstatic Larson after racing. "It was challenging here and with the level of competition a couple of notches higher this season, I think we just carried on from last year and we're the only team that hasn't changed any of our crew. We will try and build on from last year and enjoy this victory."
The outcome of who would be stood to the left and right of the Swiss team on the podium was not so clear-cut, with Emirates Team New Zealand, The Wave, Muscat and Realstone all vying for glory.
The Kiwi's came flying off the start line in the final race, but it all went wrong for Dean Barker and his team shortly after that, and a penalty in the first beat for a port-starboard incident against The Wave, Muscat, lost them not only second place to the Omani boat, but third place to the Swiss. Barker commented, "It's the first time we have raced together in five months, and our first time back on the circuit since 2011, and for sure we wanted to get a podium here, but couldn't get away with it. We're still rusty and have to focus our thoughts, but we'll get there. We definitely had a great time here in Singapore."
The reigning champions on The Wave, Muscat have a new line-up this year, including double Olympic gold medallist Sarah Ayton - one of five women competing in Singapore.
Skipper Leigh McMillan, who has been a dominate force in the Extreme 40 class for the last two years, looked ahead to what is shaping up to be a fantastic year of competition. "I think it's great that we are proving the quality of the fleet for the last two years and how competitive it has been. But by no means do we think it will remain that way and we are going to have a lot on our hands in the upcoming events. We are just delighted to finish in second place and kick off the season with a great result."
The Swiss team Realstone led the regatta after day one, and even missing a day's racing after a collision earlier in the week couldn't stop Jerome Clerc and his men, with a third place in the final race enough to clinch third place overall. "This is our best result since our debut in the Extreme 40 Racing. It wasn't easy at all and we have been through every emotion this week but we have finished really strongly. It proves that we are working in the right direction, although there are obvious improvements we can make - well done to Alinghi who just dominated over the event."
While the regatta in Singapore may have gone to the old-guard, the new teams pushed them the whole way, with eight of the 12 boat fleet sailing to race victories over the course of the last four days. While some of the new faces struggled for consistency, they all showed moments of winning brilliance, and the battle mid-leaderboard was fierce, with Groupama sailing team and their multihull expert skipper Franck Cammas, who last competed in the Series in 2010, clinching fifth place from the experienced hands on Red Bull Sailing, by just four points.
Ben Ainslie's team, J.P. Morgan BAR, which includes some of the UK's top sailing talent, finished the regatta on a high, winning the final double-pointer to bring the Act home in seventh place.
Eighth and ninth went to two previous Series winning helms, who finish the Act tied on points - Gazprom Team Russia, with two-times Series winner Paul Campbell-James on the tiller and Russian Igor Lisovenko as skipper, and winner of the inaugural Series, Rob Greenhalgh, with his team Oman Air. The Danish SAP Extreme Sailing Team brought home the event in tenth place.
The local boat Team Aberdeen Singapore, supported by Host Venue Partner Aberdeen Asset Management, made an extraordinary comeback after yesterdays' huge crash with Groupama sailing team, to be back on the racetrack today, and even upgraded their position on the overall standings to eleventh place ahead of GAC Pindar.
Skipper Moloney summed up the atmosphere, and the feeling amongst the fleet this week, "We've had an amazing and spectacular time in Singapore. This venue is the encompassment of the stadium format - wind, bumps and scrapes. It's amazing for spectators and really difficult to sail with all the wind shifts around the buildings. No spot in the world lets us sail like this. For the sailors it was completely full on."
The Act in Singapore will be remembered as one of the most action packed Acts in the eight-year history of the elite level Stadium Racing circuit. The next stop is Muscat, Oman - in just over three weeks' time.
Extreme Sailing Series 2014 Act 1, Singapore standings after Day 4, 29 races (23.02.14)
Position / Team / Points
1. Alinghi (SUI) Morgan Larson, 217 points.
2. The Wave, Muscat (OMA) Leigh McMillan, 193 points.
3. Realstone (SUI) Jérôme Clerc, 178 points.
4. Emirates Team New Zealand (NZL) Dean Barker, 168 points.
5. Groupama sailing team (FRA) Franck Cammas, 160 points.
6. Red Bull Sailing Team (AUT) Roman Hagara, 156 points.
7. J.P. Morgan BAR (GBR) Ben Ainslie, 152 points.
8. Gazprom Team Russia (RUS) Igor Lisovenko, 128 points.
9. Oman Air (OMA) Rob Greenhalgh, 128 points.
10. SAP Extreme Sailing Team (DEN) Jes Gram-Hansen, 126 points.
11. Team Aberdeen Singapore (SIN) Nick Moloney, 82 points.
12. GAC Pindar (AUS) Seve Jarvin, 59 points
(www.sailing.org)