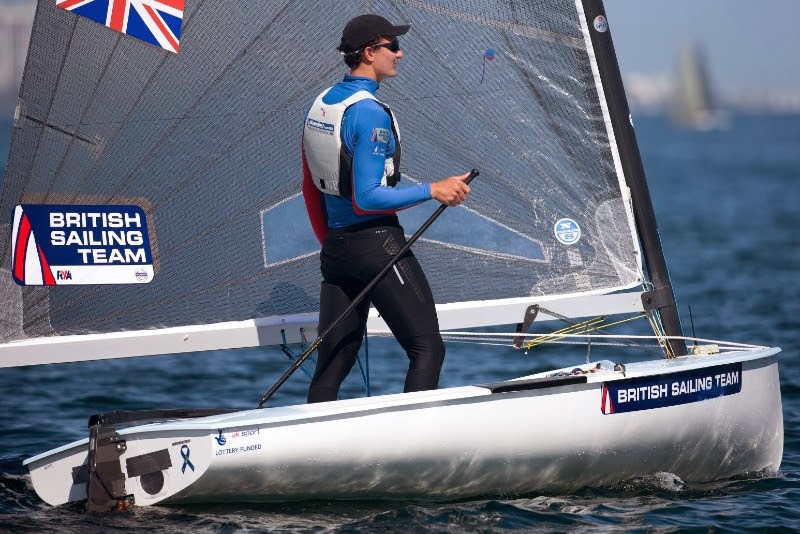 It was another day of light winds and sunny skies on Biscayne Bay. But the early news was that Giles Scott (GBR) had managed to improve his points from Monday, when after having been called early over the start line in the first race, he later had the penalty overturned when the race committee were deemed to have made a procedural error.


After a long wait, race 3 got away after 17.00, so there was only ever going to be one race. Luke Lawrence (USA) started mid line and broke out to the left before coming back to round the top mark with a small lead on Scott, Alexey Selivanov (RUS), Michele Paoletti (ITA) and Jorge Zarf (BRA). Lawrence headed right downwind as he had done on Monday, while Scott and Zarif pushed out to his left. At the gate, Lawrence still held the lead from Scott and Selivanov. Most of the leaders immediately headed out to the right.
Lawrence and Scott almost matched each other tack for tack on the second upwind, but Lawrence kept his lead at the top from Scott and Paoletti. With three legs to the finish and a very tight fleet there was plenty of scope for place changing, but Scott, who had rounded very close to Lawrence sailed past him early on the reach and then extended on the run to win the race, just over 20 seconds ahead of Lawrence. Ivan Kljakovic Gaspic (CRO) scooped third after Enrico Voltolini (ITA) was scored OCS and Paoletti ended up fourth. Regatta leader Oliver Tweddell (AUS) was back in 10th.
Lawrence commented on his race. "The breeze was soft and we finished under a beautiful sunset on Biscayne Bay. I was very excited with a second place. I led most of the way around the track, but I let Giles set up high of me for the reach, which turned fatal half way down. My goal was a solid top five in the race so I didn't find it logical to chase him and risk third. I held my position strategically to hang on to  second. All in all I am happy and have moved from fourth to third, so a red jersey for me tomorrow. I hope to keep it together and qualify for the US Team."
Tweddell added, "I rounded the top mark in fifth, and made a poor decision to gybe out to the left straight away. I hit a wall of dirty air and lost a lot of ground and places. I managed to keep my cool and chip back some spots, but that was the fatal mistake."
Current World Champion Zarif is in seventh place after placing fifth in the race. "I had a ok start in the middle of the line, and I was planning to go to the right because before the race it was paying a lot. I couldnt go as far as I wanted but I was lucky, the windy changed 10-15 degrees to the left so i was able to be top four in the first upwid. I already had a yellow yesterday and today I was worried about getting a second. So the downwnds were bad. I think this was the biggest thing I could change."
Racing in Miami continues until Saturday when the medal race for the top 10 will be sailed. Racing can be followed online with 2D and 3D tracking options available through the event website.
Results after three races
1 GBR 41 Giles Scott 3
2 AUS 261 Oliver Tweddell 3
3 USA 40 Luke Lawrence 5
4 RUS 1 Alexey Selivanov 7
5 EST 11 Lauri Väinsalu 7
6 CRO 524 Ivan Kljakovic Gaspic8
7 BRA 109 Jorge João Zarif 12
8 ITA 146 Michele Paoletti 13
9 CAN 5 Gregory Douglas 14
10 ITA 66 Enrico Voltolini 14