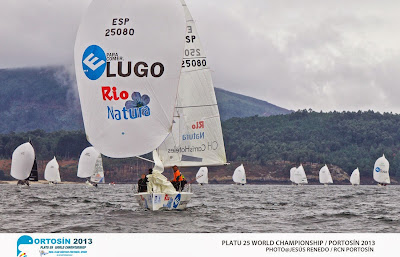 PORTOSIN –Upon the second day and after four races finished, the World Championship of Portosín -  which until Saturday takes place in the Ria de Muros-Noia, - is clearly leaded by the "E para comer Lugo" of Gonzalo Araujo, with 6 points, from the Royal Nautic Club of Vigo, which gets an excellent advantage which gives him a broad margin over his nearest rival in the podium, the Italian “Euz II Monella Vagabonda”, of Francesco Lanera and helmed by Sandro Montefusco, with 16 points. The competitiveness of “E para comer  come Lugo” has already been confirmed by its success in Spain, where the crew from Vigo conquered  the 2013 Spanish Platu 25 Championship.
Third is Jose Manuel Perez, with the “Red Bull Racing Eyewear”, from de RNC of Portosín, with 23 points. Fourth the “Brillamar”, of Alberto Garcia and Marga Cameselle, from the Monte Real Yatch Club of Bayona, with 25 points. And fifth the “Mar de Frades” of Juan Debén, from the Liceo Casino of Vilagarcía.
The second day of the regatta began with much rain, fog and without hardly any wind. The Committee decided to postpone, raising the flag on the mast of land, and not to set sail until have clearer the options that the weather of the day was offering.
Around 13.30 hours the flag was lowered. Wind direction to the windward mark was 230, meaning, southwest, with a wind that was injecting 14 knots average, with peaks of 20. This first race of the day, was taken by Araujo, followed by “Mar de Frades”, sailed by Juan Deben, being third the Italian “Euz II Monella Vagabonda” helmed by Sandro Montefusco and with his brother Paolo as tactic.
The second race was positioned for a 240, but moving the field toward the “Muros” area. The wind changed 10 degrees to the right and fell to half its intensity. The distance was reduced on both windward and leeward, and the initial mile went down to 0.9. “Aceites Abril”, of Pablo Iglesias, was in charge of taking the pulse of the second race, being second the “E para comer Lugo”, and third the “Brillamar”, of Alberto Garcia and Marga Cameselle.
The Committee intended to make a third race. Thus, with the one celebrated on Monday, achieve the four minimum necessary to validate the Platu 25 World Championship of Portosín. It was kept the same race area, but oriented towards the 250, meaning, westward. Araujo again confirmed his excellent condition by winning the race. Second was Bribón-Movistar, of Marc de Antonio, that regained their usual pace, after having broken the stay and the starboard stantion, weakening their participation. And in third place the “Euz II Monella Vagabonda”, with Montefusco discreetly keeping its regularity.
"Today was special in the first race, due to the shifty wind. Gonzalo was positioned very well from the start and took a clear advantage. The rest of the race was very simple for him, leaving us behind, and us finishing sixth. The second and third races were very similar, with steady wind, we had a good upwind leg and a good downwind leg, finishing third and fourth, respectively. We are happy with the results, but Gonzalo seems very strong. Anyway we still have much to give, and we look forward to the third day", declared Sandro Montefusco.
"Both today and yesterday we had difficult conditions, with wind very variable both in intensity and direction. The race course is being complicated, so that consistency is going to be very important for the final classification. We have improved today and tomorrow we’ll try to keep climbing positions in the general clasification. So far, Gonzalo is the stronger one and is positioned as the clear favorite,"said Pablo Iglesias, skipper of the “ Aceites Abril”. Today, Thursday, begins the third day, waiting to be able to use the first discarding of the worst result, that would come into play with the validation of the fifth round.