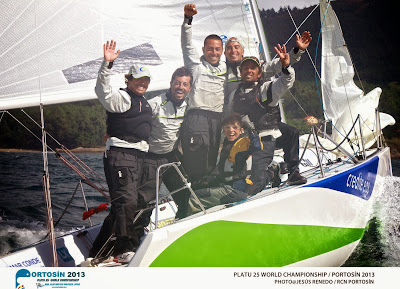 PORTOSIN – After eleven very competitive races, the Portoguese “Credite EGS” of Afonso Domingos and Hugo Rocha, is the winner of the Platu 25 World Championship of 2013,  tied at 25 points with the Italian “Euz II Monella Vagabonda” helmed by Sandro Montefusco, who was relegated to second place for having the Portuguese more podiums on first position. The Spanish “E para comer Lugo” helmed by Gonzalo Araújo, closed the podium with 31 points, 6 points distance from Montefusco and Domingos. The sailboat sailed by Araújo was one of the strongest candidates to win, but the sixth place that he got on the penultimate race, let him without alternatives for getting the intercontinental trophy, having been leading the Championship for most of the week.


Fourth place went to the local boat commanded by José Manuel Pérez and Alfredo Mella. The “Red Bull Racing Eyewear”, from the Royal Nautic Club of Portosín, finishing with 33 points after making an excellent participation in the World Championship, being always in the top positions. And fifth was the “Bribón-Movistar”, of Marc de Antonio and Sofia Bertrand, from the Sanxenxo RNC/Barcelona RNC , that ​​with their 38 points executed a great comeback after suffering several breaks in the first races, which made them fall to positions where they usually aren’t.
It was an unbelievable and exciting edition: this World Championship has been one of the tightest of the last few years, having to decide in the last race the name of the winner. A complicated course, with large oscillations in wind direction and intensity, made this Championship very tough and impredictable. Until yesterday the direct fight for the higher step of the podium seemed to be between ““E para comer Lugo”, helmed by the Platu 25 Spanish Champion Gonzalo Araújo and “EUZ II Monella Vagabonda” owned by Francesco Lanera and helmed by Sandro Montefusco, two times World Champion and three times Italian Champion.  Without a doubt this World Championship has breathed some excitement until the last minute, with a photo finish that even made doubt the Italians and the Portuguese on who the winner was.
"It has been a complicated World Championship weather wise, with a wind that was rapidly changing during these days. But as the intensity was increasing we were feeling more comfortable", said Afonso Domingos, “Credite EGS” skipper. "This Championship has had a high level. All has been decided in the last race, and that says it all. I'm leaving very happy of Portosín, not only for the title but also for the great job that the Royal Nautic Club has made both at sea and ashore with the Regatta Village", concluded Domingos.