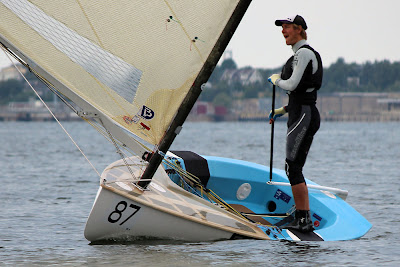 For the second consecutive day no racing was possible at the Finn Gold Cup in Tallinn, Estonia. Only four races have been sailed over four days and the prospect of further racing is not that encouraging. Andrew Mills (GBR) still holds a 17 point lead over Zsombor Berecz (HUN) and Michele Palette (ITA). There are just two days left to conclude the championship.


The fleet was held on shore in the morning but a developing sea breeze prompted the race officer to drop the AP at 14.00 and send the fleet afloat. However as soon as the boats arrived the wind started to disappear, with some large heavy clouds forming along the coast. The breeze returned gain, but was never more than 5 knots. Finally at 17.00 AP over H was hoisted to send the fleet back to wait ashore. The sea was glassy and the chance of racing was extremely slim. And so, 30 minutes later racing was abandoned for the day.
Racing on Friday has been brought forward to 10.00 to try and make the best of any wind available. Three races are planned to try and get back somewhere near the schedule. One more race needs to be sailed before a medal race cane be sailed on Saturday. After one more race, the discard also comes into play, which could change the leader board somewhat. However, whatever happens on the next two days the necessary four races have been completed to constitute a valid championship.
Championship leader, Andrew Mills said, “Another postponement and and no racing unfortunately. It would be great to get out and do some racing. Four races in four days in not brilliant so hopefully with an early start tomorrow, we can get three on the scoreboard and then it will look a bit more reasonable.”
Event director, Ants Väinsalu commented,, “Everything has come later this year. Usually we would have such weather in July, and we experienced this in July when the 470s have come here before. It was the same, with no wind. This year Spring was late, and then Summer was late and now we are having summer weather here. We normally have quite good winds, even strong winds, at the end of August. I don't ever remember in August that we have two days with no wind and no racing and with tomorrow and Saturday the same conditions are promised. It's awful.”
The sailors killed the time on the water swapping boats, telling tales, coaching their coaches, and generally larking around, while some caught up on much needed sleep as the long days and Tallinn nightlife were taking their toll. In spite of the lack of racing, spirits were high and the sailors wore smiles.
The opening series continues, wind permitting, at 10.00 on Friday with three races scheduled. If the opening series is five races or more, it will be followed by the medal race for the top ten and the final race for the rest on Saturday, 31 August. Otherwise the opening series will be concluded, with up to three races, on Saturday with no medal race.
The racing can be followed online in a number of different ways including the live video stream from ERR, GPS tracking from Trac Trac and Twitter updates on @Finn_Class.