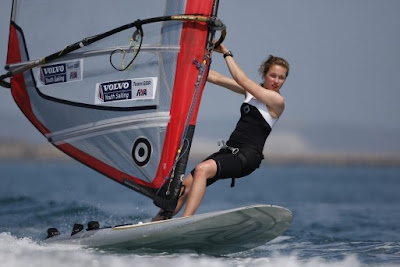 When he hit the water to go out for his 1130hrs start this morning, Pawel Tarnowski [POL] was unconcerned that the wind was light and shifty. He knew that he just had to stay out of trouble and finish the medal race to make sure that his second RS:X Youth World Championships was in the bag. This was redemption. The ISAF Youth World Sailing Championships back in July had been a nightmare. His result was no where near a proper reflection on his talent. Penghu had to see him back on the rails emphatically or people might have been tempted to start asking questions. The real battle was behind him. Kieran Martin [GBR] had a 6 point deficit to make on Martin Olmeta [FRA]. This would be an all or nothing effort. Win and give yourself the best chance or fumble the ball and be left wondering what might have been.

The last words his coach, Oli Woodcock, said to him as he left the boat  to go to the starting area left Kieran in no doubt which of the two was required of him.
Kieran duly took the gun but Martin made it easy for him. He finished 9th just in front of Pawel.
Meanwhile Yann Dupont [FRA] was putting up a determined charge to take the 4th spot of Mattia Camboni [ITA]. Job done.
A good event. Well organised. Nothing left to chance. The fact that each team was given its own local liaison was a nice touch. It gave everyone a chance to enjoy the wonderful local sea food and make new friends in the process.
RS:X Youth Men World Championships Final Results