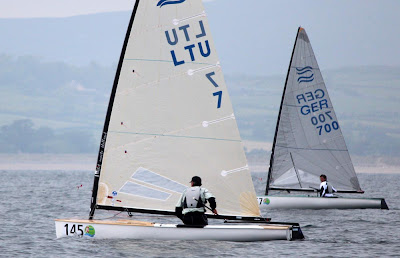 On day three at the Finn World Masters in Pwllheli, North Wales, Tauras Rymonis (LTU) spoiled Michael Maier's day by stealing the win of the only race in very tricky conditions. Maier still leads overall though, with Laurent Hay (FRA) second and Uli Breuer (GER in third. It was looking like another long day in Pwllheli. A very light morning breeze prompted an early postponement and the fleet was held ashore. About an hour later an unexpected breeze from the south-west filled in and gradually strengthened enough to send the boats out for race four. By the time the boats had reached the starting area it was up to 10 knots and building. It looked like a great race was on the cards in the best breeze of the week. However it slowly turned into, for many, the most painful race of the week so far.
After the now obligatory general recall the race started first time under black flag, with one boat pulled out. Most of the early leaders started near the centre committee boat (due to the large number of sailors, there are two lines end-to-end with three committee boats) and after clearing the fleet tacked over to the right. Michael Maier (CZE) led this group and when he tacked on the layline it looked like a fourth win was in the bag.
However the wind clocked round 20 degrees to the right, dropped in strength and the left side of the fleet almost reached into the top mark. First round was Simon Hoult (GBR) followed by Maier and Stefan Nordstrom (SWE). Most of those on the right were hung out to dry.
Hoult said, “I saw them moving the pin end committee boat to windward so I started that end and just kept going. I had good speed and in good pressure so sailed to the left hand corner, tacked on the layline and led into the top mark. I couldn't believe it. I thought all my Christmases had come at once!”
“It helped this morning that Andre Budzien had looked at my rig set-up and moved my mast 30mm, and after that the boat felt really good.”
The breeze faded further on the first downwind and with more changes on the second beat, the decision to go left or right proved critical. Tauras Rymonis (LTU) tacked over to the left early and by the time the fleet merged at the top mark had taken the lead, a lead that he held on to round the final shortened lap in 2-4 knots of wind. Maier crossed in second while Martin Hofmann (GER) was third. Lots of place changes followed as the 131 Finns struggled too find speed in the very light, shifty and sloppy conditions.
Hofmann said, “It was a very difficult race today because you had to make a big decision on which side to go. One side was OK and the other side was really bad. I rounded the first mark about tenth and on the last lap the right was good, so I went right over to that side and it brought me up to third at the finish. I have had fairly good results so far but also a black flag yesterday, so tomorrow we will see what happens.”
As if determined to have the last laugh the breeze returned at the finish of the race and the fleet had a great sail back to shore, where this evening the championship dinner is being held.
After four races Maier leads with a 12 point advantage over Laurent Hay (FRA) who picked up a sixth today, while Uli Breuer (GER) moved up to third after placing fifth. Bernd Mosr (AUT) is leading the Grand Master category in sixth place, though he has a lot of others close behind. Pascal Tetard (FRA) is the leading Grand Grand Master in 13th and Howard Sellars (GBR) s the leading Legend in 45th. Thursday will be a crucial day for all of them.
Meeting - Before racing today the sailors held their annual meeting. As usual there were lively discussions on a range of tropics including the medal race and fleet sizes, as well as hearing about the growing health of the masters fleets worldwide and the wide range of bids coming for future world championships. The meeting ended with three great event bids for the 2014 Finn World Masters from Tihany in Hungary, Los Angeles in the USA and Sopot in Poland. By a clear majority the venue was chosen as Sopot.
Two races are scheduled for Thursday and the competitors tonight are hoping for better winds. The 2012 Finn World Masters continues until Friday, when the final race and the medal race for the top 10 will be sailed.
Top 10 after day three
1 CZE 1 Michael Maier 5
2 FRA 75 Laurent Hay 17
3 GER 707 Uli Breuer 37
4 GBR 2 Allen Burrell 40
5 LTU 7 Tauras Rymonis 48
6 AUT 11 Bernd Moser 72
7 ITA 4 Francesco Faggiani 73
8 GER 8 Jurgen Eiermann 74
9 GER 711 Andre Budzien 75
10 GRE 71 Panagioti Davourlis 78