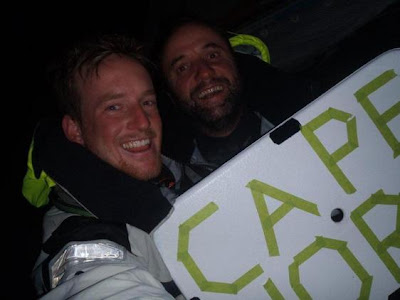 In the middle of the Southern Ocean night at 06:25 GMT on Wednesday, Conrad Colman and Adrian Kuttel crossed the Felipe Cubillos Cape Horn Gate with Class40 Cessna Citation at the head of the double-handed Global Ocean Race (GOR) fleet. The 28 year-old Kiwi, Colman, and his 41 year-old South African co-skipper, Kuttel, now join the ranks of Cape Horners and take the Felipe Cubillos Trophy in memory of the late Chilean yachtsman and skipper of the first Class40 to round Cape Horn in the 2008-09 GOR.
Colman and Kuttel had pushed hard throughout Tuesday hitting 14-knot averages to beat the gale forecast to hit Cape Horn: “It was pretty intense yesterday, with 30 knots sustained, gusting more,” Colman reported on Wednesday morning shortly after rounding the cape. “I put myself on the helm for nine hours straight to make the best progress possible with the small running spinnaker,” he explains. “Following a backing shift in the wind, we were still able to make good miles east with flatter sails and as the squalls intensified we ended up broad reaching under just the staysail and double-reefed main.”

Colman and Kuttel crossed the Felipe Cubillos Cape Horn Gate at 57S, 87 miles south of Horn Island, clipping the southern tip of Latin America’s continental shelf and wisely avoiding the shallower water closer to the cape. “I finally had a nap just before crossing the magic line of longitude and climbed into the sleeping bag with a huge satisfied smile on my face,” says the Kiwi skipper. “A pretty special place to be and what a way to do it!” Colman exclaims. “First place at Cape Horn in my first circumnavigation after all the challenges just to get here. Very memorable.” Having submitted their Cape Horn ETA on Saturday when 1,000 miles west of the cape, Colman and Kuttel are in the running for the Cape Horn Navigation Prize as Cessna Citation rounded the cape just one hour and 25 minutes behind their projected routing schedule.

In the 15:00 GMT position poll on Wednesday, Cessna Citation was 69 miles south-east of Cape Horn, climbing north-east steeply as the gale approached. “The sea state is still well established, but the wind has moderated for now before building again significantly for a time,” says Colman who is already looking beyond Isla de los Estados. “Current routing is unequivocally around the east side of the Falklands,” predicts Colman of the obstacle positioned 330 miles down the track.

Meanwhile, 300 miles west of Cessna Citation on Wednesday afternoon in second place on Financial Crisis, the Cape Horn ETA of mid-evening GMT on Wednesday submitted by Marco Nannini and Hugo Ramon became unachievable as the Italian-Spanish duo hove-to at 57S, south-west of the cape to avoid intercepting gale force winds sweeping up from Antarctica. Marco Nannini explained the decision on Tuesday evening: “After much debate, we decided it was simply too risky for us to carry on heading for such a dangerous rendezvous and have instead slowed down and we'll let the worst of the gale blow through,” he confirmed.  Although Cessna Citation had the lead and the horsepower to attempt clearing Cape Horn, Nannini and Ramon were further west and handicapped by the loss of their main, masthead spinnaker. “We considered this option, but ruled it out as we didn't think we could make it in time,” Nannini explains.

His Spanish co-skipper was in total agreement: “Cape Horn may have the smell and aura of adventure and freedom, but it scares most experienced seamen,” points out Ramon. “Hundreds of boats have broken up and sunk here and it’s only because now it’s mainly racing boats that round the cape that the number isn’t even greater,” he adds. “The Race Director of the GOR, Josh Hall, has raced around Cape Horn three times and Nick Leggatt on Phesheya-Racing has been around the Horn five times and they both advised us in emails over the past couple of days that in the conditions we would face in the gale, there would be enormous, confused seas as we crossed close to the continental shelf.”

Early on Wednesday, Nannini and Ramon - carrying storm jib and four reefs in the main - reported that all was well on Financial Crisis and their skilled and text book heaving-to manoeuvre was working comfortably in 35-45 knots and gusts up to 55 knots. By 13:00 GMT, the low pressure was on the move, heading for Cape Horn, centred south-east of the Italian-Spanish Class40 and Nannini and Ramon were back in the game, tucking into the 30-knot south-westerlies on the back of the system. At 15:00, Financial Crisis was averaging just under eight knots with 280 miles remaining to the Felipe Cubillos Cape Horn Gate.

As Cessna Citation approaches the Southern Ocean’s exit door and Financial Crisis piles on to Cape Horn, Nick Leggatt and Phillippa Hutton-Squire are picking their way across the top of a high-pressure system with Phesheya-Racing and at 15:00 GMT on Wednesday, the South African duo had slowed to under three knots as the light airs struck at 58S with 860 miles to Cape Horn.