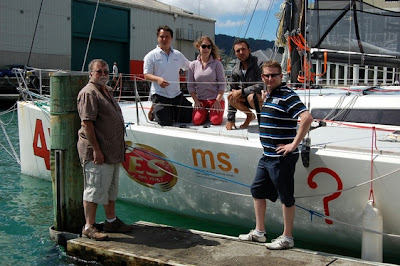 Despite the lack of a title sponsor, Marco Nannini’s Akilaria Class40, Financial Crisis, is the most heavily-branded entry in the double-handed, round-the-world, Global Ocean Race (GOR). The Italian sailor and his Spanish co-skipper, Hugo Ramon, have completed two legs of the GOR and reached the halfway point in Wellington, New Zealand, running the racing campaign on personal funding and donations collected while the duo are at sea and in-port.During the GOR’s Leg 2 from Cape Town, South Africa, to Wellington an online donation received by Nannini and Ramon has led directly to some extra branding on their Class40’s hull and a strong link to the Wellington Multiple Sclerosis Society; one of 18 regional societies throughout New Zealand which endeavours to look after the needs of people with multiple sclerosis and other allied neurological diseases. Marco Nannini explains the story: “As many of the people who follow my blog already know, during Leg 2 of the Global Ocean Race I received a kind donation to my racing budget from someone whose wife suffers from Multiple Sclerosis,” explains the 33 year-old skipper. “In return for the contribution, they asked if we could do some work to raise awareness of Multiple Sclerosis and the work done by volunteers in this field,” he continues. “So we’re here in Wellington and I’ve learnt a lot about MS and I hope other people will find out more.”
Nannini expands on the subject: “Multiple Sclerosis is an inflammatory disease of the central nervous system,” he says. “The basic cause is unknown and the clinical course is highly variable with varying levels of disability and it has a significant impact on quality of life including loss of mobility,” explains the Italian skipper. “Since a cure for Multiple Sclerosis seems to be a long way off, the focus of the Wellington Multiple Sclerosis Society is on maximising the quality of life by facilitating the provision of, and access to, all appropriate health and welfare services available.”
At the GOR race pontoons in Queen’s Wharf, representatives from the Wellington Multiple Sclerosis Society helped apply the branding to the hull of Financial Crisis. Hamish Bockett-Smith and Bill Pit from the not-for-profit organisation that is entirely dependent on grants and donations to support its activities were on hand: “This is our first connection with a racing boat,” confirms Bockett-Smith.  “We’re very appreciative to Marco and his donor to use our logo on the yacht and the opportunity to spread the word about MS and giving it a little more coverage,” he continues. “In New Zealand, it’s one of the charities that doesn’t get a lot of exposure whereas the bigger charities like cancer do get coverage, so any opportunity to become involved in this sort of project is a great help.”