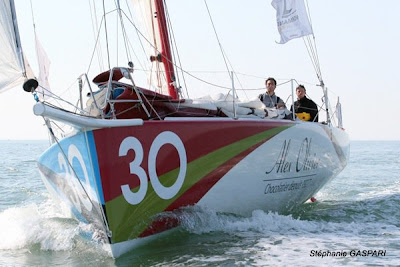 Over Tuesday night, fortunes changed for the leaders in the double-handed, Class40 Global Ocean Race (GOR) fleet as the windless isolation of Halvard Mabire and Miranda Merron on Campagne de France in third place ceased, while Conrad Colman and Sam Goodchild on Cessna Citation and Ross and Campbell Field on BSL hammered through exceptionally variable conditions on their climb to the GOR’s Australian Ice Limit at 45S with a race against the clock to avoid strong headwinds. Meanwhile, further west, Marco Nannini and Hugo Ramon on Financial Crisis had played closest to the low pressure system dominating the fleet’s attention as the Italian-Spanish duo and the South African team of Nick Leggatt and Phillippa Hutton-Squire with Phesheya-Racing continued their painful beat east at 44S.
Throughout Tuesday night and Wednesday morning, speed averages on both Cessna Citation and BSL fluctuated hourly between nine and 12 knots as the two Class40s climbed north-east from below 48S with the elastic band connecting the two boats expanding and contracting. Conrad Colman and Artemis Offshore Academy sailor, Sam Goodchild, have had minimal rest over the past 24 hours: “We’d been sailing quite happily under big spinnaker in 20 knots when a gust of 28 knots blows hard for a few seconds,” says Colman. “This was just long enough to wipe the boat out before dropping away to 15 knots instantly,” he reports. “As such, Sam and I have been kept on our toes changing between our big runner kite, to the reacher, down to the little reaching gennaker, back to the big runner and so on and so on. At least it serves to keep the blood flowing through digits that would die and fall off if left unattended.” The relentless hardship, monochrome scenery and frequent sail changes are broken only by the twinkle of the position schedule download LED on the chart table: “Blue fingers, grey sea, grey skies, a flash of light every three hours. Such is our routine for the moment,” continues Colman. “Rest is short, and often not that sweet as every major lurch heralds a call from the cockpit and another sail change.”
The current weather focus for the fleet is the low pressure system that forced Financial Crisis and Phesheya-Racing to tack south-west and avoid the worst of the south-easterly breeze spinning from the system’s trailing edge. However, with the system heading towards the leaders, it is vital to reach the western end of the Australian Ice Limit 170 miles to the north-east and turn the corner before headwinds arrive. “We should be thankful for our constant progress, as we send groans of sympathy towards our compatriots further west when we watch their tortured tracks crawl over the sea,” says Colman. “The system that promises to wallop the fleet should present us with strong northerlies when we are reaching across the top of the next gate, but we need to get there before it strikes otherwise we’ll be in for a rough ride too.” Celebrating the fourth uninterrupted day of leadership by Cessna Citation, Sam Goodchild is having problems getting to grips with the concept: “We’re 15 days into Leg 2 of the Global Ocean Race and we have just passed the half way stage,” commented Goodchild at midday GMT on Wednesday. “When I was offered to do this leg three weeks ago, I never imagined that we would have been in the lead at this stage,” he continues. “The aim was to try and give the leaders a run for their money and so far, so good, and with BSL just 58 miles behind us, that is the biggest lead so far and this close racing has made for an intense two weeks.”
In the 15:00 GMT position poll on Wednesday, BSL had reclaimed ten miles from Colman and Goodchild, but on BSL, Ross Field was watching the three-hourly schedules closely: “We’re constantly loosing miles to Cessna at the moment,” he confirms. “We know why this is happening and expect a few more lost miles in the next 24 hours, but there isn’t much we can do about it – sorry about that - but there’s still a lot sailing and passing lanes.” On Wednesday afternoon, the Fields were to windward of Cessna Citation, 224 miles from the western end of the ice limit located 960 miles from the south-western tip of Australia: “We’re reaching up to the mark at 45 South and apparently this mark is one imposed by the Aussie Search & Rescue and will have an inflatable kangaroo as a rounding buoy!” continues Ross Field. “We then reach along for 800 miles and then dive south again it seems from the weather we’ll go to about 50 South.” The leaders will spend approximately three days sailing above the virtual barrier before they are free to drop back down into the Southern Ocean. “I’m looking forward to the next two weeks of reaching and running and hope that it’s not too cold,” he adds.