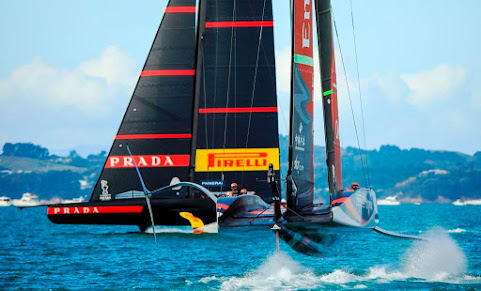 Auckland (NZ), March 15, 2021 -  After the cancellation races on day 4 due to lack of wind on the racecourse, the race program in Auckland between Luna Rossa Prada Pirelli and Emirates Team New Zealand resumes in the final match of the 36th America's Cup presented by PRADA.  Coming from a 3-3 tie, today closes with two wins for Team New Zealand as they move to the top of the leaderboard with a 5-3 score.  Field E was the setting for both regattas, in a 13-knot wind setting that during the afternoon dropped down to 7-8 knots, especially at the upwind buoys.In the first regatta, the New Zealand boat approaches the starting line and is forced to bear away in order to avoid an early start penalty, whereas Luna Rossa with a perfect time on distance starts windward of the kiwis and controls all of the first upwind and the second downwind leg.  At the first downwind gate the Te Rehutai manages to separate and moves to the right of the course, gains a few meters, capitalizing on this gain that will turn into a 58-second lead for them at the finish line.

In the second race Luna Rossa makes a good start. A few seconds after the line the kiwi boat is forced to move to the right side of the course, which seems to have a weaker pressure. The first beat is led by Luna Rossa who rounds the upwind gate with a 16-second advantage. At the first downwind the New Zealanders manage to close the gap and get closer to Luna Rossa’s wake, but during a jibe they fall from the foils and are able to resume flight after almost 3 minutes, allowing Luna Rossa to accumulate an advantage of over 4 minutes. This lead however vanishes at the second upwind mark, when the roles get reversed. This time, due to a wind drop at the upwind mark, Luna Rossa falls from the foils during the maneuver and gets stuck in a wind hole.  Racing resumes tomorrow with two more races starting at 4.15 pm, with a forecast of light wind conditions.

Pietro Sibello, Mainsail Trimmer
“We lost two points today. However, we proved that we can hold our own and in the start we fought hard. They seemed to have an edge on us in these conditions, especially in the first race. In the second we had another nice start and here again we fought back. Unfortunately we made a mistake in the second upwind and fell off the foils when taking in a really light wind that just died on us, which is when they passed and took the point home. Tomorrow is another day and our intention is to go out and keep on fighting until the very end.”