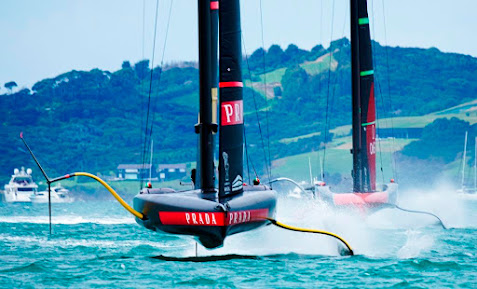 The first day of the final match of the 36th Americas' Cup presented by PRADA closes with a tie.  The two races were staged on racecourse E, between the coast and the island of Waiheke, in northerly 13-18 knots winds.  The first regatta started on time at 4.15 pm with ETNZ entering on port and Luna Rossa on starboard. At the end of the two minutes Luna Rossa was on the starting line on starboard tack downwind to the kiwi boat that took immediate control.

Throughout the following legs ETNZ's advantage was always no more than 300 meters, except for the final downwind where the kiwis extended their lead and closed the race in front with a 31-second advantage.  The second regatta had Luna Rossa in front right from the start, moving to cover their opponents right away and gaining distance on all six legs, defending the more favourable right side of the course.

The last two legs saw the New Zealand boat getting uncomfortably close due to a separation taken at the fourth gate, by which they recovered a few seconds, both at the fifth gate and in the stretch towards the line, that they crossed only 8 seconds behind Luna Rossa.  The day ended on a positive note, with Luna Rossa taking home its first point in the series, and marking the Italian team's first victory ever in an America's Cup match.

Max Sirena, skipper e team director
“It’s been an interesting and important day.  There was a lot of expectation on the part of both teams to understand the performance of the two boats.  For us it was really interesting because we raced in a wind range that is definitely more favorable for their boat and their configuration, and the fact that we have seen that by racing well we can beat them is good news for us and gives us even more confidence.  We have definitely made several mistakes, like the start of the first race, and in the second race at the last downwind gate we opened a door for TNZ, which was a mistake that could have cost us a lot. Tomorrow we will have a series of meetings to analyze what we did well and our mistakes, but obviously the day is positive: to be back on shore with a 1 - 1 in a wind range of 13-18 knots, where they certainly felt more confident, gives us a lot of energy. If we race well we can do something special.”