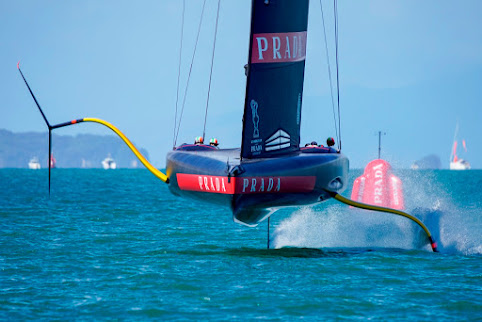 The first day of racing in the Prada Cup final between Luna Rossa Prada Pirelli and INEOS Team UK starts with two solid wins.  The light wind conditions during the first part of the day led the race committee to choose field A for the races of the day.  Two regattas, won with a comfortable lead, allow Luna Rossa to take an immediate 2-0 score.

The first race starts with a few minutes of delay due to the light breeze on the course that in a matter of minutes stabilizes at 8-10 knots. At 4.19 pm the umpires give the warning signal while the wind increases from 025 °. Luna Rossa enters on port tack and wins the start against the British boat that falls from the foils and struggles to get back up as they remain in displacement mode for over a minute in the entry box. These precious seconds allow Luna Rossa to stretch forward with a 600-meter gain on the left side of the course that shows more pressure.

Even after INEOS starts to pick up the pace Luna Rossa is careful to protecting her advantage and manages to stretch it gate after gate, always over a minute ahead, thanks to correct handling and clean maneuvers around all the gates. The regatta ends with Luna Rossa crossing the finish line1: 56 minutes in front of the British boat.
In the second race the wind increases from 045°, with peaks of 20 knots in some parts of the racecourse. This time at the start Luna Rossa is on the right side of the entry box and immediately moves in to line up against Ineos. The British team defends its call requesting a penalty that is not confirmed. When the two-minute countdown runs out Luna Rossa is on the line ahead of the British boat. After a few meters she is forced to the right side of the course, but at the first cross starts to gain the first few meters and builds an advantage that will increase and consolidate throughout the regatta. It is a closer race than the first, but Luna Rossa manages to stay in control the whole way through, reaching the finish line with a 26 second lead.
Max Sirena, skipper e team director"It was a positive day and it started in the best way, but we’ve only just begun and have only won two races. It will be important to keep the concentration high because anything can happen. For tomorrow we will go out on the water knowing that the boat is doing very well. The interesting thing is that today we raced in light wind conditions in the first race and medium strong wind in the second. This was very important and helped us understand where we were in terms of performance compared to our opponents. The guys were very good and handled the boat well. They got good starts in both races and did well in controlling their advantage. Maybe we made some mistakes in the second downwind in the second race, but in the next few hours we will work to analyze the data to understand if we need to do something more in the coming days. The series is still very long, so we need to keep our heads down and stay focused."