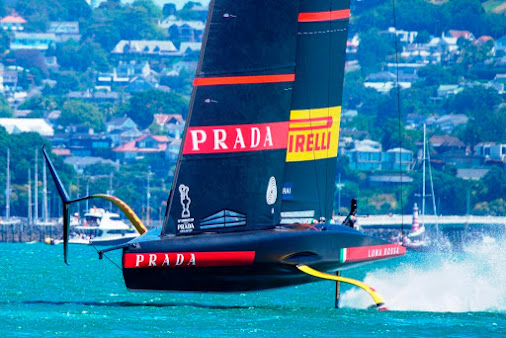 Auckland (NZ), January 14, 2021 - The PRADA Cup in Auckland is now on and, as expected, there was no lack of excitement and surprises. Both regattas were set on Course C, at North Head, in close proximity of the city. Westerly winds, ranging from 13 to 16 knots, allowed for both races to take place without delays.   The first of the two regattas started at 3:15 pm (New Zealand time). INEOS Team UK raced twice and won both the first match against NYYC American Magic (+1:20 sec.) and against Luna Rossa Prada Pirelli (+0:28 sec.).  At 4.15 pm Luna Rossa Prada Pirelli was out on the water to face the British team, who today showed great improvements compared to the December races, both in terms of speed and boat handling.

Round Robin 1 - Race 02: Ineos Team UK vs Luna Rossa Prada Pirelli
Luna Rossa Prada Pirelli has right side entry. The British team enters the box from the left and moves straight to the right side of the pre-start area. At the first cross they gain control and force Luna Rossa leeward to the left side of the course. Both baots tack together and start on port side. The British team gets the right side of the racecourse. After a few seconds, Luna Rossa moves to the left. The right however appears more favourable. The British team stays with this side throughout all six legs. Luna Rossa, still forced to the left, gradually closes the gap. At the first upwind gate the delay is of only 15 seconds but increases to 22 on the downwind. It is a following game. Despite some mistakes in rounding the upwind mark, Luna Rossa manages to narrow the gap and keeps it within a range of 200-300 meters. At the final upwind gate has Luna Rossa with a 13 second gap from the British boat. On the final downwind leg however Ben Ainslie takes a comfortable advantage and crosses the finish line 28 seconds in front of Luna Rossa.
Tomorrow’s schedule has two more races; in the first Luna Rossa Prada Pirelli will face American Magic, and with this the first round robin comes to an end.
In the second part of the afternoon, round robin 2 will start with Ineos Team UK racing against NYYC American Magic.

Francesco Bruni, helmsman
“Unfortunately, we lost this regatta at the start. With a better start for sure we could have had a well-fought race. I think Ineos Team UK did a good job getting the lead of the regatta. We waited for them to make a mistake but this didn’t happen. We had a couple of issues at the windward gate that cost us quite a few meters. I must give it to Ben and all the boys on his team who proved that they are very competitive. Tomorrow the forecast is for slightly lighter winds but we can’t let our guard down. The teams are all very strong and if we want to win we can’t make mistakes.”.