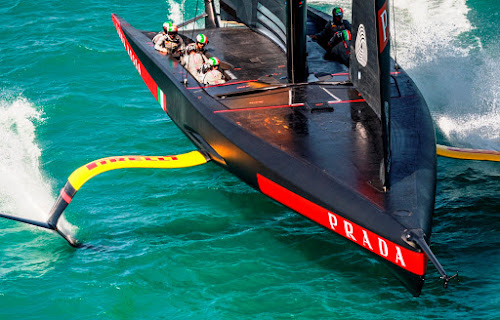 Auckland (NZ), December 20th - On the fourth and final day of these 2020 regattas all attempts to race come to nothing. The PRADA Christmas Race represented the last opportunity for the defender to race against the challengers before the start of the America's Cup event from March 6-21. However, with just one regatta started and cancelled, for absence of necessary conditions, the hopes for some extra practice finally dwindled.Despite the forecasts for light north-easterly winds, these failed to build on the designated Alfa racecourse in front of Takapuna. The committee gave start to the first match between Emirates Team New Zealand and Ineos Team UK but as the wind began to drop on the first upwind leg, the race committee announced a course shortening to the first downwind gate. At the end of the time limit however neither team had reached the finish line, at which point the racing was abandoned.
From a wider perspective, this long weekend of racing closes positively for the team. After the cancellation of the races in Cagliari and Portsmouth, this testing ground was highly awaited and this was the first opportunity for all four teams to finally meet together on the water.
Max Sirena, skipper and team director“These past three years have been really challenging. We worked practically in the dark, with no benchmarks. This was a great opportunity, before the start of the official PRADA Cup regattas in January. We learned a lot and obviously we are sorry because we could have won somes races that we lost. But we treasure the experience.Starting from this evening we will get back to work to understand where and how we can improve. We need to understand our strengths to be as ready as possible for the PRADA Cup which is, at the end of the day, the regatta that matters. The team has done an amazing job and I have to thank the shore crew who has worked day and night for a month, and of course our sailors. We have seen how much we improved in three days in terms of boat handling both in the pre starts and in tactics.”