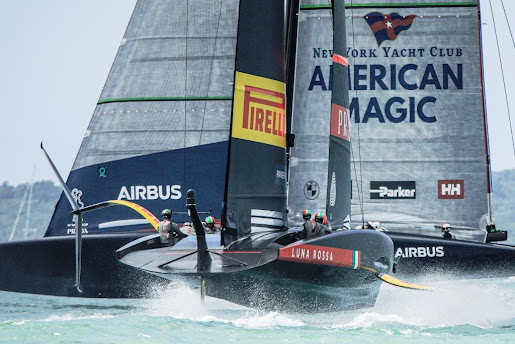 Auckland, NZ December 18th 2020 – Second day of races in Auckland for the PRADA America’s Cup World Series.  Field C was once again the scene of today’s action on the water, but weather conditions were quite different from the previous day, with 12-14 knots of north-easterly blowing all afternoon.  Course C is not a simple one to race on, especially when northerly winds come in and are unstable both in direction and intensity due to the influence of the 260-meter-tall barrier of Rangitoto.

Luna Rossa raced in the first and third regattas of the day against the US team American Magic who had been unbeaten until yesterday.  Both regattas were intense and balanced: the first win went to Luna Rossa with a 12 second lead and the second by American Magic who crossed the line 30 seconds in front after a close battle of tacking and jibing.

With the first two races of the day, round robin one came to an end. The regattas that followed gave way to the second round that will finish with the last race of tomorrow (Saturday). The last four races will decide the final ranking of the ACWS.  Following today’s results American Magic holds the lead together with Emirates Team New Zealand. Luna Rossa Prada Pirelli, with two wins and two losses, now ranks third.

RACE 5 - Luna Rossa Prada Pirelli vs American Magic
Luna Rossa enters the box early on starboard tack, immediately taking a penalty which the team takes in stride thanks to an excellent starting speed at the left of the field. In the first upwind, a bad tacking manoeuvre keeps the Americans at a standstill for a few seconds, allowing Luna Rossa to increase her lead by almost 500 meters. Throughout the race the Americans managed to recover some of their delay and get back into the race, proving an excellent speed, especially on the downwind legs as they forced Luna Rossa to a tacking duel to defend the lead. Luna Rossa kept the lead for all four laps, crossing the finish line with an advantage of 12 seconds.

RACE 7 – American Magic vs Luna Rossa Prada Pirelli
This 4-lap regatta took place in the second part of the afternoon. Luna Rossa entered the box on the left side but took a penalty for early entry. The situation was evened when a penalty was inflicted to the American boat, but Luna Rossa then took a second penalty, this time for a manoeuvre just a few seconds before the start.
Hampered by the forced delay, the team worked to catch up for the rest of the race. The American boat kept its lead of about 15 seconds at each gate, notwithstanding Luna Rossa’s significant gains on the windward legs, but when they extended their distance on final downwind leg they passed the finish line 30 seconds ahead

Vasco Vascotto, afterguard
“We are quite satisfied with how the day went, although we still have some important improvements to make. It’s a shame we “spoiled ”our performance with a few too many mistakes. Despite the complicated starts, we sailed with awareness and character, respecting the strategies we had planned this morning. We knew conditions would be tricky, with a stronger current on the right and more pressure on the left side of the course. At least in the initial part we were able to manage our information correctly. We are also very happy with the performance of the boat which was doing very well."

Pierluigi de Felice, trimmer / grinder
“In both starts we had some problems with the countdown system and took a penalty for early entry. In the second race, after inflicting a penalty on the Americans, we took a second one. This forced us to start late, and to work at catching up throughout the race. We stayed very close for all four laps of the course and tried to overtake the Americans on several occasion, also taking risks, but it didn’t pay off. But we are still quite happy with how the day went. We reached some excellent speed conditions and made big improvements compared to yesterday."