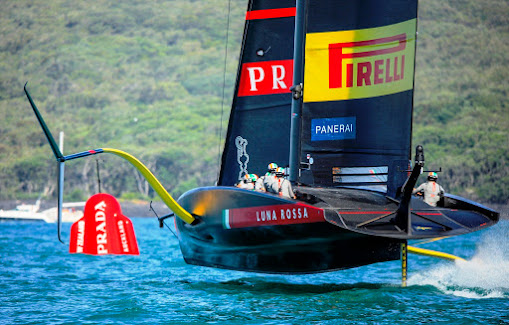 After over two years of waiting, on 17th December the AC75 yachts finally lined up on the racecourse. The show was unique, packed with moments of suspense and intense match racing action.  With all twelve races completed, the PRADA America’s Cup World Series closes with a third place for the team. Three wins and three losses the AC75 Luna Rossa ranks third overall, behind the winner Emirates Team New Zealand, followed by American Magic in second place. No result instead for the Christmas race, abandoned for lack of wind.
The long weekend closes with a positive outcome. The racing, in a wide range of wind conditions, allowed the team to test the boat’s performance and assess the next steps in preparation for the upcoming PRADA Cup to be held from January 15th to February 26th.
Rules of the GameThe America’s Cup is a competition of sports and technology that, right from the start, has been founded on a set of rules, sometimes quite intricate, often referring to dated documents or to complex Protocols made up of infinite articles.The boats are designed and built to comply with very specific regulations: the Class Rules.In March of 2018 the AC75 Class Rule was published,With its 35 articles, the document regulates various aspects, from hull measurements to sails, permitted materials and crew weight in order to guarantee a fair competition, but at the same time allow space for technological innovation.On the water what counts are the sailing rules. The starting procedures are governed by the Racing Rules of Sailing America's Cup. In other words, the usual racing rules, issued by World Sailing, are adapted to the speeds and characteristics of the new flying monohulls.Restrictions also apply to the crew on board. The maximum weight allowed for sailors on board is 990 kg and their equipment, including life jackets and safety devices, cannot weigh more than 5 kg.