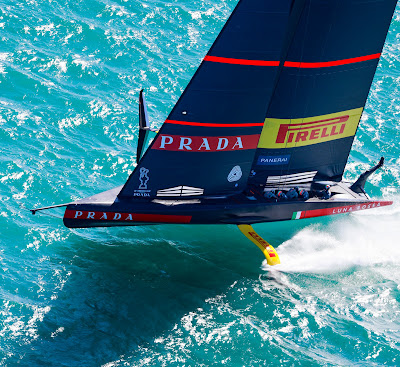 Auckland (NZ), December 16, 2020 – Following the days of official practice race sessions in the Hauraki Gulf, the moment has come to enter the heart of the competition with the PRADA America's Cup World Series - Auckland and the PRADA Christmas Race. The regattas will take place from tomorrow, December 17th through Sunday December 20th. This will be the first event showcasing the new AC75 yachts together on the same racecourse. The AC75 yachts are 75-foot monohulls (about 23 meters) featuring two lateral foils that allow the hull to lift and sail above the surface of the water and reach speeds up to 50 knots. Designed to compete in this 36th edition of the America’s Cup, they are the result of over two years of work, where each team has individually interpreted the Class Rule.

Race Director Iain Murray will be able to choose from the five available racecourses, spread throughout the Hauraki Gulf, depending on the weather conditions.
Starting at 3 pm each day (New Zealand Time) the program will feature four races of about 25 minutes each, in which all the teams (the 3 challengers and the defender) will compete in Match Race regattas, organized in two round robins.
After three days the ranking will decree the winner of the PRADA America's Cup World Series. This result will, in turn, determine the draw of the pairings for the Christmas Race, scheduled for Sunday December 20th. The format of the regattas will be different for the two events. The PRADA Christmas Race features two direct match races, from which the winning teams will move on to the Final, whereas the two other teams will compete in a “petite finale” for third place.

All matches will be broadcast live by TV stations of over 120 countries around the world. In Italy Rai Due and SkySport will follow the event live, with technical comments and insights. The racing will also be streamed live from the website www.lunarossachallenge.com to allow a connection with the race course thanks to the news on the team's social media platforms.

Max Sirena, Skipper and Team Director
“The “practice days” of this week have been really interesting. They have allowed us to finally get up close with the other teams, although we really look forward to the real racing. Over the next few days we will race in a wide range of weather conditions, going from light to stronger winds and it will be a test from all points of view: from boat performance to work methods, organization and also of the psychological side. We will have a chance to see where we are and where we need to keep on working to improve.”