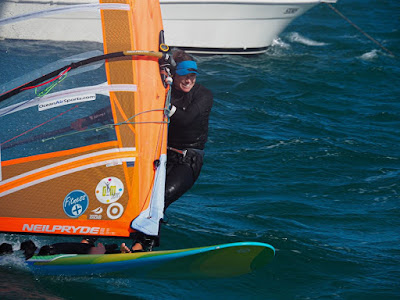 MELBOURNE, AUS (Saturday, Feb. 29) - The final day of racing at the 2020 RS:X World Championships came to a close today, resulting in two more US Sailing Team athletes claiming their tickets to the Tokyo Olympic Games. Farrah Hall (Annapolis, Md.) and Pedro Pascual (West Palm Beach, Fla.) both have earned selection to the 2020 U.S. Olympic Sailing Team and will proudly compete in Enoshima at the Summer Games.


Greeted by another light wind day in Sorrento, the only races sailed today were the Men’s and Women’s Medal Races, and one final race in the Men’s fleet. After wrapping up a long week facing challenging conditions, all three U.S. competitors have something to celebrate, with Geronimo “Momo” Nores (Miami Beach, Fla. taking home an Under 21 Bronze Medal.
After completing a long season, Hall is already looking forward to moving forward and honing her focus on the Olympic Games Tokyo 2020. “I’m absolutely thrilled to represent the U.S. at the Olympics again. The last few months have been really hard, so now that this extensive travel period and selection events are over, I have some breathing room to focus on preparing for the Games.”
As a returning Olympian, Hall is all too familiar with what it takes to make it to this elite level of the sport. She has spent over a decade campaigning for the Olympics in the RS:X and as she reflected on her progression from the London 2012 Games to now, she is particularly proud of her dedication.
“I’m really happy I have stayed in it for so long and keep fighting,” said Hall. “Sometimes I surprise myself when I think about how long I’ve been dedicated to this. In that respect, I’m proud of myself. I’ve sacrificed a lot of certainty and stability to pursue this goal, but the tradeoff has been worth it.”
U.S. athlete Pedro Pascual likewise punched his ticket for the Tokyo 2020 Games this week. Though this will also be his second Games, the reality of being selected as the Men’s RS:X representative for Team USA hasn’t sunk in yet. “I don’t know what to feel, I haven’t really swallowed it yet. I still can’t believe I’m going to my second Olympics,” he said.
This time around, Pascual is looking forward to having his experiences from the Rio 2016 Games in his back pocket. “I was 20-years-old in Rio, the youngest on the US Sailing Team. I really didn’t know what to expect and found it to be overwhelming—exciting to the point that I didn’t know how to control those feelings. So now that I know what to expect, I know how to handle the pressure and nerves.”
After a strong week in a variety of conditions, U.S. Men’s RS:X athlete Geronimo Nores claimed a spot on the podium among the competitors under 21. While Pascual emerged the victor of the U.S. trials, Nores is encouraged by his U21 bronze medal win and overall performance this week.
“I came down here with goals in mind and we executed everything in our plan. At the end of the day, we didn’t get the Olympic ticket, but that’s how it goes,” he said. “I have to say, it was a lot of fun sailing against Pedro. He truly is an awesome competitor and a great guy. Whoever performs the best and most consistently qualifies, and that's the name of the game. This has been an incredible learning experience for both of us. I’ve learned a lot about myself in high-pressure situations, and we ended up with a medal. For now, I’m quite happy with that and we’re going to use all of this moving forward for the next one.”
US Sailing’s Olympic Development Director Leandro Spina (Miami, Fla.) has been working with Nores since his early days competing at the Youth World level. “Momo has a long term plan and is right on track. After winning a Youth Worlds gold medal, now he has transitioned into the Olympic class with great individual races results in the top of the fleet and has become one of the best in breeze,” said Spina.
After his successes this week, Spina and Nores have a lot to look forward to as they begin preparations for future quadrennials. Spina continued, “A U21 medal at the Olympic class World Championship is proof of his potential for the future and he is really looking forward to the new foiling discipline for 2024 and 2028”.
“We’re getting started early and fully going for it,” Nores added. “We already have summer training camps and regattas planned to put together a really good young American team. As the future unfolds, we’ll see how that goes.”
All three U.S. competitors will return to the U.S. eager to take a brief break before getting back to work. While Nores has his sights on foiling and getting comfortable with the new iQFoil windsurfing equipment, Pascual and Hall will begin their next round of preparations for the Tokyo 2020 Olympics. Their next major international event will be the 51st Trofeo SAR Princesa Sofia Regatta, beginning March 30 in Palma de Mallorca, Spain.
U.S. Men's RS:X Results - View Full Results
US Women's RS:X Results - View Full Results