US Sailing Team - Day Five: Final Countdown for Olympic Selection at the 2020 Worlds 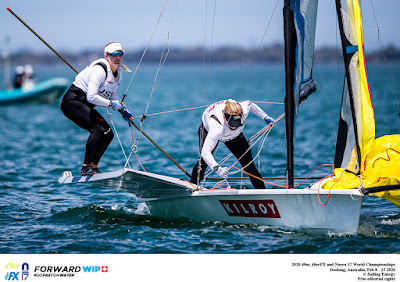 Tomorrow, the 49er, 49erFX, and Nacra 17 event will feature two fleet races followed by a top 10 medal race in each class. U.S. athletes will have a lot on the line as these three races will determine the athletes that have qualified for the 2020 U.S. Olympic Sailing Team.
For these classes, the U.S. Olympic Trials system is a two-event qualifier. The athletes with the lowest combined overall score from the 2019 and 2020 World Championships will qualify for a spot on Team USA for the Tokyo 2020 Olympic Games.
The current leaders in the overall U.S. trials are Nevin Snow (San Diego, Calif.) and Dane Wilson (Ojai, Calif.) in the 49er, Paris Henken (Coronado, Calif.) and Anna Tobias (Pittsburgh, Penn.) in the 49erFX, and Riley Gibbs (Long Beach, Calif.) and Anna Weis (Fort Lauderdale Fla.) in the Nacra 17. While some pairs lead the trials by a greater margin than others, each of the spots is still up for grabs.
Racing in the 49erFX and Nacra 17 fleets is particularly tight. Stephanie Roble (East Troy, Wisc.) and Maggie Shea (Wilmette, Ill.) need to put two more teams between them and fellow U.S. athletes Henken and Tobias to claim the 49erFX spot. Likewise, Sarah Newberry (Miami, Fla.) and David Liebenberg (Livermore, Calif.) need to do the same with Riley Gibbs and Anna Weis for the Nacra 17 berth.
Though Snow and Wilson have a more comfortable lead over their fellow American competitors, the U.S. has not earned Games representation in the 49er class and an upset is still possible internally. As there are more countries competing in these classes than there are spots at the Games, countries must qualify before athletes can be selected. Should another country forfeit their berth, the U.S. will select a representative based on the victor of these 2019 and 2020 World Championship trial events.
Despite the element of the trials at play, the athletes will hit the water with their eyes on the whole fleet, “I would anticipate our group going out and doing their best to get a good first race under their belt and deciphering where to go from there,” said Sally Barkow, US Sailing’s Olympic Performance Manager and Coach.

“It’s interesting, of course, we’re competing against other U.S. boats for selection, but the way the points are, everyone else is competing against the other countries for places in the standings. So it’s very much a mentality of getting to the top mark in the top 10 and going from there. If they put up two good scores tomorrow, there’s a good chance everything else falls into place.”
While some sailors will realize dreams tomorrow, others will face the reality that only one U.S. boat will have the chance to go to the Games in their class. “At the conclusion of trials, of the 40 athletes working towards a goal they set years ago, 25 will feel disappointed,” said Leandro Spina (Miami Fla.), US Sailing’s Olympic Development Director.
“My goal is to remind them that the formula for success includes multiple-quadrennium efforts and that they are right on track. The conclusion of the trials is a celebration for the new Olympian and the teammates that stand strongly behind their continuing efforts.”
As Spina said, tomorrow, the US Sailing Team will indeed be celebrating the individuals that will represent the country in Tokyo. However, it takes a village to get athletes to the highest level of performance in any sport. Tomorrow, the U.S. sailors will also be celebrating the years of hard work, improvement, and accomplishment that each of the athletes has dedicated to the betterment of their craft and the Olympic disciplines in America.
“The outlook is promising for another quad for most of our athletes, it doesn’t hinge on results tomorrow, which is just one day of one event,” said Barkow. “We have a lot of young athletes who are just getting their feet wet in this experience and we’re supporting them as much as we possibly can to carry on because we know the depth of the team and the reality of what it means to go to the Olympics is more than a few years of racing.”
The conditions for tomorrow’s penultimate day of racing look promising. The race committee is expecting wind out of the southwest building to the class’ upper limit of 25 knots and possible showers that hopefully will clear early and avoid hindering the breeze once again.
At 9:50 a.m., the live broadcast of the 2020 49er, 49erFX and Nacra 17 World Championships will begin.  Tune in to the event website to watch.