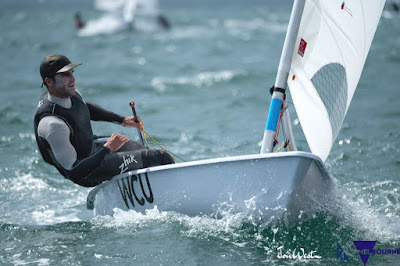 Melbourne, AUS (Sunday, Feb. 16, 2020) - The first round of the 2020 World Championships come to a close with the conclusion of the 2020 ILCA Men’s Laser Standard World Championships. Today, athletes finished three fleet races in the final series to round out the week spent battling tricky conditions on the waters of Sandringham, Australia.
Charlie Buckingham (Newport Beach, Calif.) closed out the last day with three impressive finishes of 9-2-12 in Gold fleet, solidifying himself as the highest-ranked American. Overall, he had an up and down week, and ultimately finished the event in 18th place. He admits that it’s lower than where he would have liked to be, but acknowledges that the event still has good highlights and takeaways. “I had an up and down week,” he said. “Honestly, it was kind of a tough performance for me but I finished the regatta with three good races, so I’m happy with that.”


As a U.S. Olympic trial event, this regatta was an even more important stop for American athletes on the road to the Tokyo 2020 Olympics. Of the U.S. sailors, Buckingham emerged victorious, winning the trials over fellow competitor Chris Barnard (Newport Beach, Calif.).


This will be Buckingham’s second time representing Team USA at the Olympics. He also competed at the Rio 2016 Games, where he finished 11th. “I’m super happy and proud to be able to represent the U.S. again and honestly a bit relieved,” he said.


Buckingham entered this regatta with an 18-point lead in the trials over Barnard, thanks to their results at the 2019 World Championship. Still, despite the comfortable gap, he’s grateful to be officially through the selection process. He elaborated, “Olympic selection is a big step towards the main goal. Now that I’ve achieved that, I can focus on the real thing. So, I’m relieved I can start focusing on the Games”


With this event and Olympic selection under his belt, he’s looking forward to improving his lead-up and performance in Tokyo, “I feel way more prepared this time. I’ve been to one Olympics already and that experience counts for a lot. I also feel that I’ve improved a lot as a sailor over the past four years, so I’m super excited for this Olympics.”


As is the reality of all sports, for each selection winner there is at least one athlete that will miss out on the opportunity to go to the Games. Though Chris Barnard had some impressive highlights throughout the quadrennial, he fell short of where he needed to be to beat Buckingham for the Games spot and finished this event in 30th.


“It was a tough week overall. I had some really good moments, but I just couldn’t quite string the top scores together the way I wanted to,” he said, commenting on how this event went for him. “This event was always going to be an uphill battle with the deficit of the trials and just tried to give it my best effort. Unfortunately, the last two Worlds just didn’t go my way.”


Even though the two events that dictated selection weren’t Barnard’s strongest, he’s grateful to have some other notable accomplishments to look back on. “There is a lot to be proud of,” said Barnard. “I’ve come a long way. I had some other good World results and winning Palma has been a good trophy to have on my bookshelf. That win will always be something I’m really proud of, looking back. I wanted to punch that Olympic ticket and represent Team USA at the Games, but that’s sport.”


US Sailing’s Olympic Head Coach Luther Carpenter (Cypress, Texas) agrees that both athletes have a lot to be proud of, “Charlie and Chris have turned a real corner in performance this quad, honing the magical combination of fitness, technique, and racing savvy, in an incredibly difficult discipline. Both of these U.S. Laser sailors have finished top-ten in multiple events this quad and have shown to themselves and other Americans what can be done with hard work, focused training, and determination. The Olympic Laser fleet is surely the definition of dinghy sailor excellence, and I’m proud of the progress Charlie and Chris, along with their coaches Diego Romero (GUA) and John Bertrand (San Mateo, Calif.), have accomplished.”


Carpenter looks forward to watching and supporting Buckingham as he prepares for the Games, “This final road to Enoshima presents more opportunity for Charlie, and I know he’s focused on his goal and dream – to win a Medal at the Olympics.”


With the first round of selection in the books, the US Sailing Team will celebrate the victories of the newly qualified athletes and get to work preparing them as best as possible for the Tokyo 2020 Olympic Games.