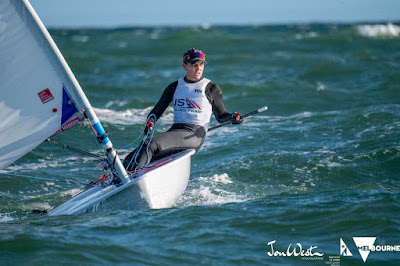 
The final day of the 2020 ILCA Women’s Laser Radial World Championships yet again delivered some shifty conditions on Port Phillip Bay. Athletes hit the water as scheduled and sailed one race in three to eight knots. When the shifty breeze never solidified enough for the remaining two races, the Race Committee made the decision to finish the day after one race, marking the end of the Championship and U.S. Laser Radial Olympic trials.
At this point, Railey, at age 32, is an Olympic veteran with two Games under her belt. Still, her road to Tokyo has been far from easy. “It has been a hell of a road to get here. These last two Worlds have been the most stressful trials I’ve ever competed in,” she said.
“I’ve been working really hard over the last five months after I pretty much started from rock bottom with my body because of health issues. I knew coming into this event that Australia was going to be windy and it turned out to also be really shifty. So, going into our trials sitting in second place and expecting conditions that I wasn’t necessarily 100% ready for was definitely stressful.”
After overcoming so many challenges in the last three years, she feels more prepared to take on the mental challenges of the Games, “This is the hardest road I’ve ever taken to get to an Olympics. I feel like I’m better prepared for these Games because, in the past, I didn’t really know what it meant to work for something this hard.”
Though Railey has a great sense of accomplishment, the first thing on her mind after officially qualifying for the Games wasn’t the joy of victory. Instead, she first thought of her teammates.
“It was funny,” she mused, “of course when they signaled that the racing was over, I should have been ecstatic and jumping around my boat and celebrating qualifying for my third games, but I just started crying because I was sorry that I took a dream away from people that I care about. I don’t even know how to put it into words besides saying that I really care about Erika and Charlotte and I wish the three of us could be going together. All of us deserve it. We’ve all been working our butts off, and of course, I don’t like that I can’t be there with my teammates.”
The tight-knit team mindset is something that's relatively new to U.S. Laser Radial sailors. The close collaboration between Railey, Reineke, and Rose is in part thanks to the efforts of US Sailing Team Laser Radial coach Steve Mitchell (GBR).
He said, “Historically, a team approach hasn’t been the case in a lot of classes in the U.S., but we’ve really tried to make that a feature of the Radial team. Paige, Erika, and Charlotte have come such a long way in the last while and they’ve all had really great results at international events. They can all be really proud of what they’ve done.”
With a collection of impressive performances and several medals from major international events, all of the U.S. Radial sailors have reasons to celebrate this quadrennial. Reineke is particularly proud of the improvements she has proved to herself and others this week, “I definitely improved in heavy air. Even at this regatta, my best race was the windiest race of the whole event.”
“It just goes to show that even though people always tell me that I’m smaller, or too light and this boat doesn’t fit me, my hard work has paid off over the last four years and I was able to keep up with the top girls in those strong breeze conditions. I think I proved some people wrong in that aspect and I proved to myself that I could do it.”
With plenty to be proud of this week, the U.S. athletes have already packed the container and are eager to return to the States. Though she has just wrapped up three long months in Australia, Railey won’t be wasting any time before turning her focus to the Games.
“I’m definitely looking forward to going home, but I’m also on another five-month time crunch,” she said. “I went into this event understanding that my weight and fitness were not where they need to be if I want to be medal potential. So, I have to get back to the drawing board and be really strategic on how to get in the best shape possible for the Games.”
After taking some well deserved time off, the Radial athletes will compete next at the 51st Trofeo SAR Princesa Sofia Regatta. The event will begin on March 30th in Palma de Mallorca, Spain.
U.S. Laser Radial Results - View Full Results

As things settle down in Sandringham, the RS:X athletes in Sorrento look forward to tomorrow’s final day of racing. Though the windsurfers also faced similar light and shifty conditions to the Radial athletes, they managed to get all three races in.
As one of the tallest athletes in the Men’s fleet, Geronimo Nores’ (Miami Beach, Fla.) may have had a tougher time in the light-air races, but his coach Yaniv Meir (ISR), is still pleased with his performance today. “In the morning we realized it’s a hard condition since he’s one of the bigger sailors in the fleet, but he actually performed really well,” said Meir. “His first beats were really good, he was totally ready for the day despite the wind, and he put in 100% on the water.”
Nores’ overall solid performance this week has also guaranteed him a spot on the podium among the competitors under the age of 21. Ranked 33rd overall, Nores is guaranteed the U21 bronze and he has a shot at the silver tomorrow.
Just behind Nores in the standings is U.S. Men’s RS:X athlete Pedro Pascual (West Palm Beach, Fla.), currently ranked 34th. In the Women’s fleet, Farrah Hall (Annapolis, Md.) currently stands 35th.
Tomorrow, the competitors will have one more day of racing to solidify their spots in the overall standings. Three final races are scheduled to begin at 1:00 p.m., local time. After the first two races, the top-ten athletes in each fleet will compete in a medal race while the remaining competitors close the event with a final fleet race.
Tomorrow will also mark the end of the 2020 U.S. RS:X Olympic trials and two athletes will have officially qualified to Team USA for the Tokyo 2020 Olympic Games.
U.S. Men's RS:X Results - View Full Results
US Women's RS:X Results - View Full Results