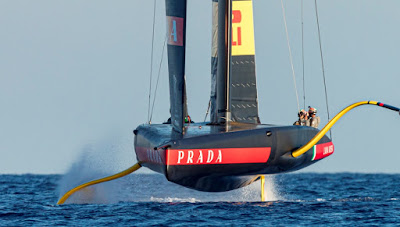 With just three months to go until the first event of the America’s Cup World Series (ACWS) gets underway in Cagliari from 23 to 26 April, the competition is already in full swing. After the Christmas break, the team is back and full-on: an intense programme sees the crew busy training on shore and on the water. During its last training session the Luna Rossa AC75  dismasted.  Fortunately no one suffered injuries and the boat and equipment were not severely damaged. The team however has had to review its schedule for the coming weeks.

Vasco Vascotto, sailing team member: “The Christmas break helped us to “recharge our batteries”, but we wanted to get back to work as soon as possible. What we have here is an important event that requires us to be very focused. The incident, during the last sea trial, delayed our programs, but we learned a lot and soon will be back on the water.”
Cagliari is getting ready to host the first stage of the America’s Cup World Series. The race village, located along Via Roma, will be open to the public from 22 April, and racing will take place in proximity of the city harbour. For the first time the AC75 yachts, the new foiling monohulls designed for this edition of America’s Cup, will compete over four intense days of racing.
The event is stirring much curiosity and interest and will be the testing ground for all of the teams as they start to reveal their hands.
Meanwhile competitors are starting to take up residence in Cagliari. Ineos Team UK arrived at the beginning of January and has already started a series of tests on the water with their AC75 “Britannia”.
On the afternoon of 27 January, during training, the AC75 “Luna Rossa” dismasted just a few miles off the coast from Marina di Capitana. No team members were injured in the incident. The mast, sails and rig were immediately recovered by the sailors on board, with the help of the shore crew on the support ribs, and brought back to the base. The whole team immediately went to work to understand the cause of the dismasting and get back on the water as soon as possible to resume the training sessions in preparation for the America’s Cup World Series which will take place from 23 to 26 April.
We had a chat with Max Sirena, Team Director and Skipper of Luna Rossa Prada Pirelli
What led to the dismasting incident?
Yesterday, while training off the coast of Marina di Capitana, the mast came down.  Fortunately, no one was injured. We are now assessing our data to understand exactly what happened to cause the dismasting. We know that in this game these things can happen in the development and testing phase.
How is the mood in the team?
The reaction was impressive, considering that the guys delivered the mast back to shore, which was not an easy job at 20 miles from the base. Everyone helped the crew and did an amazing job. The sight of the mainsail still attached to the mast, all in one piece, was definitely a positive boost.
What news of the development programme of Luna Rossa Prada Pirelli?
Clearly what happened will have an impact on the programme. However, we had already planned to upgrade the boat in February, so we will rework our timing in order to be back on the water as soon as possible.
Cagliari is ready to host the first leg of the America’s Cup World Series, the regatta circuit for the brand new foiling AC75 monohull yachts. Competing in the Sardinian capital alongside Luna Rossa Prada Pirelli will be Emirates Team New Zealand, the America’s Cup defender, and the remaining two challengers, INEOS TEAM UK and NYYC American Magic, who will race following the classic match racing format.  During the first three days the teams will go up against each other using a double round robin system, with four races daily. On the last day, the top two classified boats will compete in the final races, where the first to score two points wins. The other two teams will meet in a single play-off race, to determine the third and fourth place. Each race will last about 20 minutes and will be held on a windward-leeward course.
A race village set up in Via Roma, along the seafront, will be open to the public from 22 April, with a rich programme of entertainment on offer and maxi screens installed to follow the races live.
Expectations are high for this event, where these revolutionary boats, the result of state-of-the-art research in the fields of engineering and materials, will battle on the water for the first time.
The America’s Cup World Series circuit will continue with an event in Portsmouth (United Kingdom) from 4 to 7 June, followed by Auckland from 17 to 20 December.